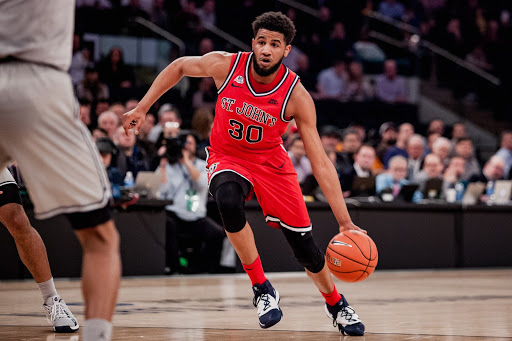 St. John’s Men’s Basketball guard/forward LJ Figueroa announced via Instagram on June 20 that he will be transferring from the borough of Queens to the Northwest, as he landed a spot on the University of Oregon’s roster.

“First and foremost, I want to thank St. John’s for the last two seasons,” Figueroa wrote on Instagram. “It was an incredible time both personally and athletically.”

Figueroa shoots well from the three-point line and attacks strong on defense. During his career with the Johnnies, Figueroa averaged 14.5 points and shot 37.3% from the three. He also averaged 1.9 steals per game. In both of his seasons with the Red Storm, Figueroa was one of the best shooters in the Big East.

The St. John’s transfer originally put his name into the NBA draft back in March. By the end of May he had put his name in the NCAA transfer portal, leading him to the Ducks. According to a NY Post article, “the 6-foot-6 wing hasn’t ruled out going the pro route.”

“I’ve truly enjoyed NYC, the fans, the atmosphere and most importantly my teammates,” he wrote in the Instagram post. “In addition, I want to thank Coach Mullin for recruiting me and Coach Anderson for this past season.”

On Big East Media Day in October of 2019, Figueroa said that his decision to stay with St. John’s for the 2019-20 season was heavily influenced on the school’s short distance from his hometown, Lawrence, Mass. Yet, in his Instagram post he stated that his decision to transfer and begin a new opportunity was due to circumstances out of his control.

Figueroa will need an NCAA waiver to suit up for the Ducks this coming year, as he has already used three years of eligibility. If he does not receive this waiver, he will have to redshirt this season and play his final year of eligibility in the 2021-22 campaign.

“I’m looking forward to joining the University of Oregon and competing for a national championship,” Figueroa said. “Go Ducks!”