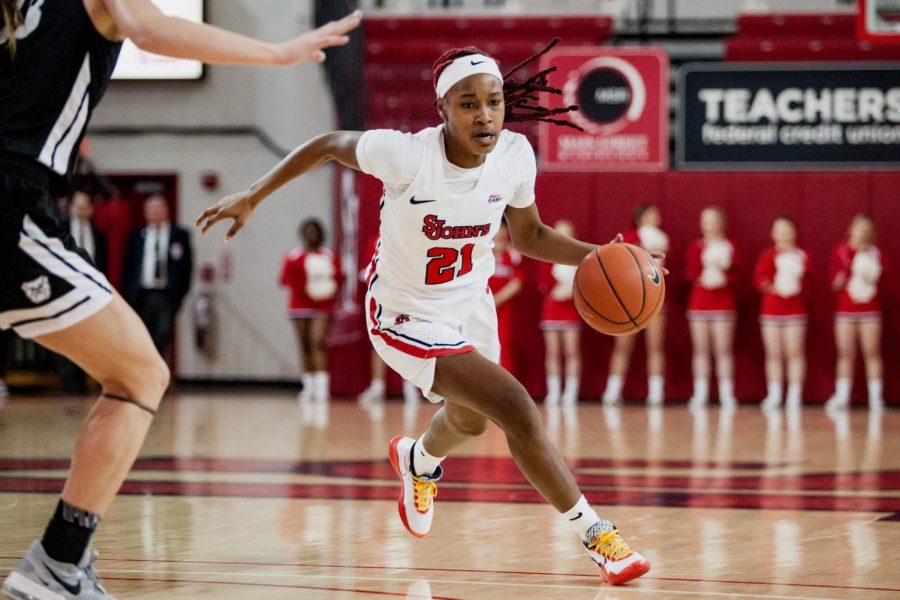 An athlete has the honor of having a platform, and with this honor comes the responsibility and ability to reach countless individuals. As we have seen in recent years, numerous athletes have utilized theirs for the best, speaking out against injustices in an attempt to make the world a better place – take Colin Kaepernick, for example.

St. John’s athletes are well-known on and off campus, and although their platform may not be as large as a professional’s, it is just as significant. Speaking to players from both the women’s and men’s basketball teams, it is evident that the recent protests and actions taken by the National Basketball Association in regard to the Black Lives Matter movement has had a huge impact on the sports world. Women’s Basketball Captain Qadashah Hoppie and Men’s Basketball junior guard Greg Williams discussed how important it is for professional players to make use of their renowned platform.

How do you feel the protesting of games in the NBA has helped the Black Lives Matter movement?

Both Hoppie and Williams say they are  pleased with the steps the NBA has taken to express their allyship with the Black community. The NBA showcasing its concern demonstrates the importance of the message of equality the movement is highlighting to the world.

“I think the NBA has done a great job with taking initiative,” Williams said. “It’s great to see high profile players like Lebron using their platform to send out a good message.”

“A lot of times when things like this happen people get distracted with things that aren’t as important,” Hoppie said. “The issue is there but if it’s not affecting you, you don’t really care, at this level of entertainment, everybody can see it and it’s bringing more people to the fight.”

Hoppie emphasized that the platform of an NBA athlete reaches individuals of every background, not only in the United States but around the globe. This helps increase awareness of what is happening in our country and allows more people to understand how essential it is for our nation to work to dissolve the everyday prejudices that the Black community has faced for centuries.

The NBA has been inscribing BLM messages on the courts and players have taken to their own apparel to stand in solidarity with the movement. How do you feel about administration and players using their platform to voice their opinions?

“I really appreciate players and administration speaking out,” Williams said. “It’s something that, as a player, I really look up to.”

Williams added that it is nice to see the NBA using their voice to reach their large audience.

“They might just be basketball players but being able to speak out gives them the opportunity to impact the world.”

These professional players have the ability to make American issues a global concern thanks to their platform, and Hoppie says this factor is important.

“I’m pleased to see the NBA and WNBA taking steps ahead with the players,” Hoppie said. “You see the support when you want us to play for you, to make money for you, be the face of your brand, and I think it’s necessary that since we do all of this for you that you support us when it’s something this important.”

Hoppie listed a number of things the WNBA allowed players to do to support the Black Lives Matter movement: walk out of the game, kneel for the pledge of allegiance and wear shirts with seven gunshots on the back.

“It’s good to see the players and the NBA finally gain the confidence to say something,” Hoppie said.

Hoppie highlighted that the calls of the Black Lives Matter movement are so much bigger than the sport of basketball. The St. John’s players and administration recognize this, using their voices to emphasize the fact that without representation, there will be no justice. The calls for human decency, racial equality and respect need to be addressed before addressing anything else.

As seen on Twitter, some feel that NBA and WNBA players have a privilege over other workers in that they are wealthy enough to essentially stop going to work to protest. Do you feel players are abusing their power at all?

Hoppie said that until this year, players such as Colin Kapernick have lost their jobs after letting their voices be heard. She said that athletes are held to higher standards in terms of what they say and put on the media.

“A lot of people could’ve been quiet, they didn’t have to say anything,” Hoppie said. “People could try and sit back and not get upset and be silent, so for them to speak up shows that no matter what they get paid it’s a big deal.”

It has been announced in recent news that Big East players will be wearing BLM patches on their uniforms for the entire upcoming season.  How do you feel about this recognition of the movement throughout the season?

As announced in mid-August, the men’s and women’s basketball teams of the Big East Conference will wear patches dedicated to the Black Lives Matter movement. The gesture was unanimously approved by all 11 schools, each one excited to take part in the fight for justice.

“I think it’s a good opportunity for players in the Big East to take some sort of initiative,” Wiliams said. “I really look forward to being able to help spread the message.”

It seems that young athletes have  a positive outlook on doing their part in contributing to the movement. Williams said that it is great that the Big East will have the same opportunities as the NBA regarding the movement. By having the representation all season long, the topic will not just be swept under the rug but instead embraced and recognized as an urgent matter that demands to be addressed.

Within St. John’s  women’s and men’s basketball teams there is an awareness of just how important NBA participation in the Black Lives Matter movement is for the fight for racial equality in America. Qadashah Hoppie and Greg Williams emphasized that the actions taken by the NBA players and administration hold significant value in the progression of the battle. These steps prove to the world that, while it may just be basketball, there is no voice too big or too small to speak up against the injustices that the Black community faces in American society.