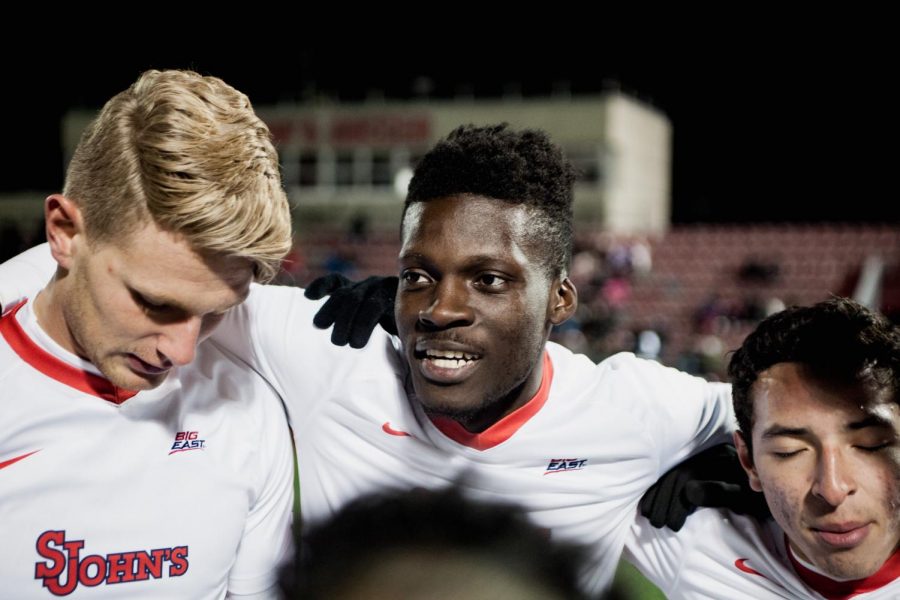 St. John’s Men’s Soccer junior forward Tani Oluwaseyi was named part of the Preseason All-America Team by College Soccer News. This distinction is awarded to players nationwide who have excelled throughout their career and are destined to make positive contributions to their team in the future.

Oluwaseyi’s accolades do not end there. The Ontario native was also named Big East Offensive Player of the Year, making him the first St. John’s athlete in over two decades to win this title. Oluwaseyi was honored to achieve both awards not only for himself but to bring more recognition to the men’s soccer program at St. John’s.

“It’s great to bring more recognition to the school as a whole and put St. John’s back on the map,” Oluwaseyi said.

Being selected for the Preseason All-America Team did not come easy to Oluwaseyi. He said he was overcoming an injury while simultaneously giving “120 percent” on the field.

So what is it that’s pushing Oluwaseyi past the obstacles he faces?

“One comes from an inner drive to be the best I can be in everything I do,” Oluwaseyi said. “I don’t like doing things unless I can put my all into it, that’s why I love soccer so much, it’s allowed me to focus my energy to be as good as possible.”

He said that the people around him — his dad, coaches and teammates — keep him motivated as well.

Oluwaseyi said that his coaches are always there to push him one step further. They never let him settle for anything less than his best and promote his overall improvement.  It seems comfort is not an option for Oluwaseyi. His mentality is that if he is not pushing himself, he is not succeeding.

His success comes not only from a passion to be the best he can be for himself, but also an inner calling to help those around him reach their full potential as well.

“I have a drive to be successful so I can get to a position to help other people,” Oluwaseyi said.

He said he hopes to keep this success coming in upcoming seasons by pushing himself even further than he had last summer.

Amidst all of Oluwaseyi’s success he, as well as countless other athletes, shows concern for how the COVID-19 pandemic will affect the upcoming season. As an international student-athlete, Oluwaseyi faced the hardships of worrying about his home country’s safety, as well as how his education and soccer season would play out in the United States.

“With the pandemic, it was kind of tough not knowing if I’d be able to train as much as I wanted to,” Oluwaseyi said. “In Canada when things started opening up my best friend and my brother and I would go out on the field, we probably weren’t allowed out there but we did it anyways, and just started grinding and working throughout the summer.”

On the field he worked on improving his game from last season, putting into place a “killer mentality.”

“Never settle for anything,” Oluwaseyi said, “whether it’s in practice or a game. Just do everything 120 percent and go from there, never settling is the big thing that pushed me.”