Celebrating the past: Mike Anderson talks to the 1998-99 Men’s Basketball team 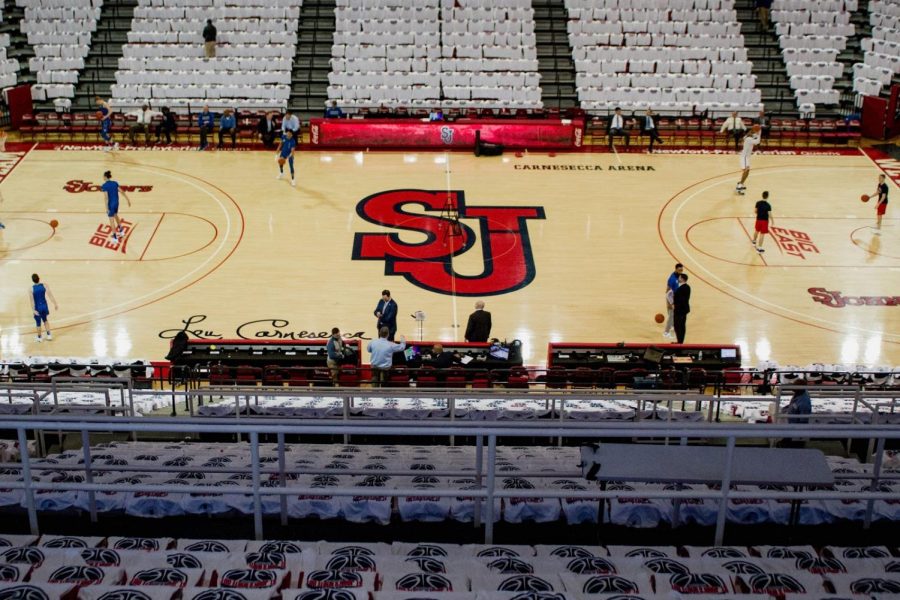 Twenty-two years after setting foot on the court of Carnesecca Arena, members of the St. John’s Elite Eight Men’s Basketball team got together via WebEx to reminisce on their time as Johnnies. On Monday Sept. 21, these alumni met with current Men’s Basketball Head Coach Mike Anderson, Athletic Director Mike Cragg and hundreds of fans for the second installment of the virtual “Chat With” segment, hosted and moderated by Vin Parise of Fox Sports.

“I want to congratulate you guys and celebrate you guys,” Anderson said to tip off the conversation.

There were seven members of the 1998-99 team present at this event: Collin Charles, Reggie Jessie, Tyrone Grant, Donald Emanuel, Albert Richardson, Erick Barkley and Metta World Peace (formerly known as Ron Artest). During their season that year, the Johnnies, then led by Head Coach Mike Jarvis, went 29-8 overall with a 14-4 conference record. This team made it to the Elite Eight round of the NCAA tournament for the sixth time in program history, where they fell just three points short of a win against Ohio State University with 12 seconds left in the matchup.

The former Johnnies caught all of the fans up on what they have done since their time at St. John’s. Some of them remained in the business of sports, like Barkley and Metta World Peace who were first round NBA draft picks. Others got into the workfield and are positively impacting communities through youth services, gyms, training programs, tutoring services and so on.

“Not every athlete … [has] the opportunity to continue sports,” Metta World Peace said, while recognizing Emanuel’s work in sales and marketing.

When looking back at their 1998-99 season with St. John’s, one of the first things the former teammates said was that they were always competitive on and off the court and this dynamic got them as far as they did in the NCAA tournament.

The former Johnnies said that this competitive drive started in the gym. As long as you have players who are willing to work hard and put their all into practices and games, Emanuel says that “everything else is going to fall into place.”

These players also agreed that if Grant had not gotten hurt during the matchup against Ohio State, they would have taken home the trophy.

“To advance in that NCAA tournament,” Coach Anderson said, “you don’t only have to be good, but you have to be lucky too.”

In an article by ESPN written in 2019, they said that Jarvis led the 1998-99 team to “the best on-court moment of the post-Carnesecca era.” So, what was it that brought this group of men together to form the St. John’s Men’s Basketball team that year?

“It started when we were kids,” Barkley said.

Many of the members of this team were New York-natives who spent the majority of their basketball careers playing together on the same teams. Coach Jarvis saw these players together before coming into his first year at St. John’s in 1998 and knew their potential.

This bond and competitiveness are what created the Men’s Basketball team that year. And it only took one or two games into the season for them to realize how unstoppable they were on the court.

“We smashed UMass,” Grant said. “And then we came into the locker room and I think Ron had a fight with Chudney ‘cause Ron ain’t get enough shots or some s—. During the fight we realized, ‘Yo, nobody can really mess with us’.”

However, that wasn’t how Barkley remembered it.

Barkley said it was after the first game when he realized how talented they were. He said they beat the University of North Carolina Asheville by 55 points in just the first game. When Parise fact checked this statement, he said Barkley was spot on with the rival and score difference.

Regardless of when they realized it back then, everyone knows now that this team was dominating almost every game. Each player saw it evolve as practices started getting more intense throughout the season. They had to work hard and support each other every step of the way.

“We fought each other like brothers were supposed to,” Emanuel said, “but we all believed in each other.”

These players agreed that almost everything they learned through playing basketball at St. John’s improved them in life beyond college. Grant, with some extra comments from Metta World Peace, gave a special shout-out to the “unsung hero,” Strength and Conditioning Coach Al Caronia, who not only pushed them physically but also got them ready for the future. They said he would push them past their potentials and always had them up early in the morning to get work done.

“It’s not just basketball,” Coach Anderson said in response to early practices. “These are life skills that you need, that you learn here.”

Coach Anderson said that fans, boosters, coaches and everyone involved in the St. John’s Men’s Basketball Program want to get back to where this “ultimate team” made it. They want to take it the whole way to the National Championship and represent New York.

The former Johnnies who were on this video call have nothing but love and support for the St. John’s community. Coach Anderson said he will welcome them to the courts of Taffner and Carnesecca with open arms once the COVID-19 pandemic passes.

He went on to say that the University’s connection to and passion for the city and its fans goes unnoticed by many people. Emmanuel told Coach Anderson that if his team plays hard, New York City is going to love them beyond what words can describe. He added that most of the time this drive to play hard will guarantee the team wins.

“I can’t wait to get to the gym tomorrow,” Coach Anderson said, hinting at pushing his team a little extra. “Our guys are in trouble tomorrow.”