Freshmen get the storm rolling for St. John’s Baseball 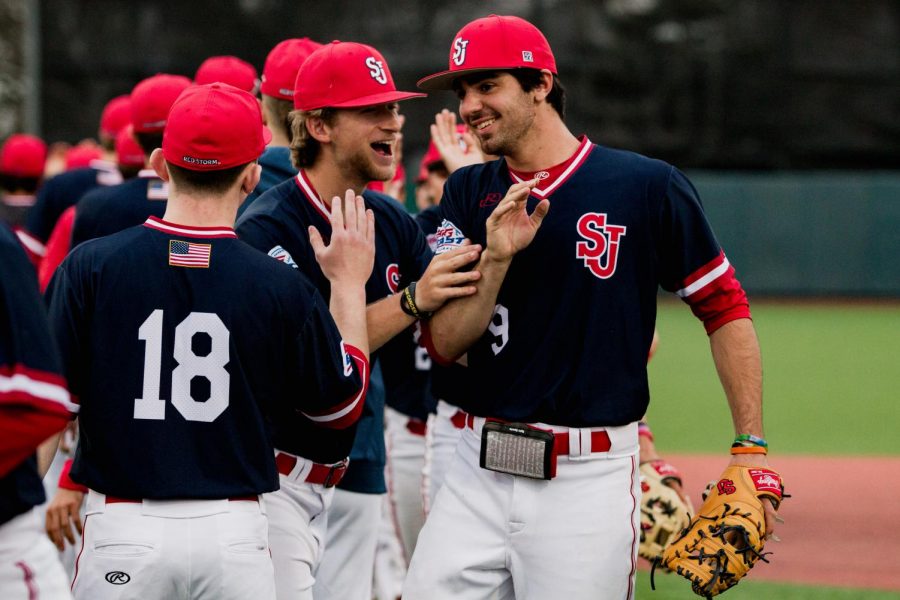 Every year, St. John’s Athletics has the honor of recruiting talented athletes to their teams. This year,  St. John’s Baseball team has the pleasure of welcoming two right-handed pitchers, Tyler Roche and Nick Guzzi, who ranked 269th and 278th on the national top 500 freshmen list by Perfect Game. Not only were these freshmen regarded so highly on a national level but they were also ranked as the top two freshmen entering the Big East this coming year.

“This is a new chapter in life,” Roche said in an interview with the Torch via Zoom.

Why exactly did they commit to playing for the Red Storm? Roche said that he visited a lot of campuses after receiving offers from Arizona State University, Georgia Tech, Penn State and Duke prior to his junior year of high school, but when he stepped foot on the St. John’s Queens campus he said “it was something different.”

“My dream was always able to go to a school like Duke,” Roche said, “but it was something about when I stepped here that made me feel at home.”

Guzzi said that he was recruited at a tournament during the summer after his sophomore year of high school. Like Roche, Guzzi said he had a lot of options to choose from. He said St. John’s pitching Coach George Brown and Head Coach Mike Hampton “welcomed [him] with open arms.”

“For me this is the closest one to home out of all of them,” Guzzi, Point Pleasant, New Jersey native, said. “And for me I want my family to be able to see me play a lot. So, if I were to go somewhere else down south, that wouldn’t have been the case.”

Division I baseball is something that both Roche and Guzzi are looking forward to experiencing with the Red Storm. Roche said he is excited to get to the next level of playing and seeing what kind of player he will develop into. Guzzi said he is ready to compete, and that missing his spring season to the COVID-19 pandemic was “a blessing in disguise.” During his time off, he said he learned a lot about his position on the mound.

As freshmen, playing at the collegiate level is a whole new world for these two. Moving up from high school to college ball, there are many adjustments to be made.

“In high school you can get away with just throwing fastballs by people all the time,” Guzzi said. “You can’t do that here. You have to actually learn how to be a pitcher, not just a thrower.”

Roche and Guzzi are not only talented on the mound, but also carry with them the interpersonal skills that help build a team. So, what exactly can these two men contribute to St. John’s Baseball?

“Something that I can bring to the table at St. John’s is a sense of leadership,” Roche said.

Roche continued that his opportunity to play at St. John’s is something big. He said he is ready to bring that “want-it-badly” mentality to the team.

Guzzi agreed with Roche, saying that he could also bring leadership skills to this campaign. He added that on top of that leadership, he will bring a lot of passion and energy to the field.

Roche said that his best pitches are his two-seam fastball and change-up. He said in his short time with St. John’s he already sees an improvement in his pitching and is beginning to vary his pitch types.

Guzzi said that his four-seam fastball and circle change-up are two of his best pitches. Guzzi said that coming into college, he did not have much variety in the pitches he threw. Yet, as soon as he started working with the Johnnies, “it clicked like that in a week.” He says he has been working on throwing curveballs and sliders with coach Brown.

Both Roche and Guzzi are ready for an impactful season and hope to up their game and help the team out as much as they possibly can.

“Right now, I’m in the 89 and 92 [miles per hour] area,” Roche said. “My personal goal would be to put some weight on and get that fastball harder because then the velocity will ultimately make it harder for me to get hit.”

Roche continued to say that he sees a big chance that St. John’s will be leading the show in Omaha, Nebraska, for the Big East playoff this season.

“l definitely want to work on my location and my off-speeds a lot more, as well as definitely getting my fastball up,” Guzzi said. “For the team, I would say I think everybody’s goal is to win the whole thing and just win as much as possible.”

Roche and Guzzi are not the only freshmen stars on the St. John’s Baseball team this year; the freshmen class is loaded with ranking players. Four more freshman Johnnies were grouped on the list of potential impact freshmen, including Brandon Castellini, who topped out the group at 12th, Chris Conniff and Chuck Sanzio who went back-to-back at number 14 and 15 and Ben Adams, who rounded out the group at number 23.

“The rankings are nice, but we can’t be too happy,” Roche said. “We still have to come out and do what we have to do. There’s a lot of work to be done.”