Coming off a Big East win, Women’s Volleyball team will not let COVID-19 bring them down 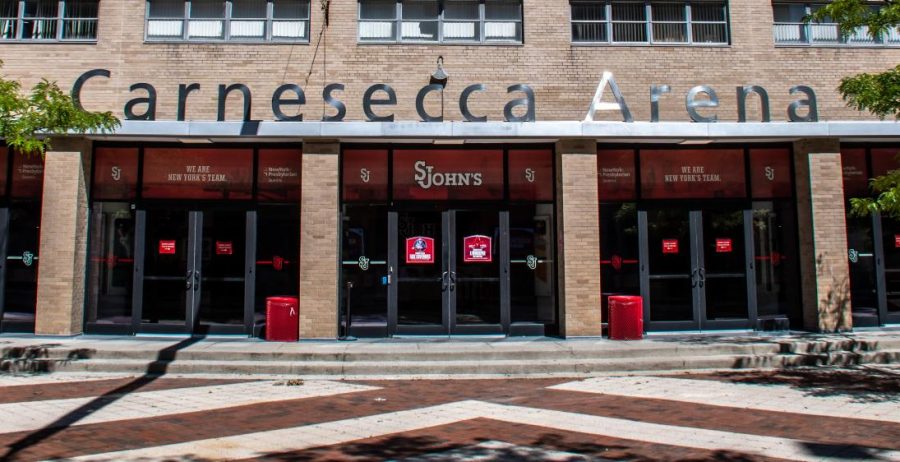 The members of the St. John’s Women’s Volleyball team are looking ahead to their postponed season with a win on their backs. The team completed last season by earning the Big East Volleyball Championship Title on Nov. 30, 2019. In this championship game, St. John’s defeated Marquette University 3-1. The team has not seen this title since their victory in 2007, when they celebrated on the same court at the Al McGuire Center in Milwaukee, Wisconsin.

Junior outside hitters Rachele Rastelli and Efrosini Alexakou were part of this win in only their second year as Red Storm athletes. As the only two players returning from last year’s team, these athletes are determined to carry the same work ethic and positive mentality that brought them previous successes into upcoming seasons.

Looking back to their freshmen years

Rastelli and Alexakou entered their first season as part of a pack that consisted of six freshman athletes. Alexakou noted how the chemistry of the team off the court was great, but that energy did not seem to translate on the court. Since the tight-knit aspect of the team was already established throughout their freshman season, Alexakou said their main focus now was to work on their chemistry on the court.

“We were much more prepared,” Alexakou said in regard to the team’s unity on the court during her sophomore year.

Alexakou says at this point the team knows what is expected of them. Rastelli agreed; as starters, the athletes were able to learn how the team worked and gain an understanding of the chemistry on the court. The team set their goal and worked until they achieved it, setting an extremely high standard for upcoming seasons.

Standards may be high but according to Rastelli and Alexakou, it’s all in the past. Rastelli said she feels as if the team is starting from zero once again; however winning last year’s title does come with the advantage of having other teams feel intimidated when St. John’s steps onto the court. Alexakou adds that more experience does not mean much if the team is not willing to apply it. By focusing on improving skills and maintaining high standards and expectations, Rastelli and Alexakou presume their success is bound to carry over.

Winning the title meant a lot to Rastelli and Alexakou.

“Seeing the trophy meant we achieved our goals,” Rastelli said, as obtaining the physical trophy symbolized to the athletes that the team’s hard work had finally paid off.

The celebration was short-lived, as they quickly realized the success could not stop here. Rastelli said the only way to keep up the good work was to work even harder in upcoming seasons.

Moving forward amid the COVID-19 pandemic

The COVID-19 pandemic has brought along with it a lot of uncertainty. The 2020 volleyball season has been postponed to January 2021 and in turn has set back countless universities. However, at St. John’s there is no room for despair. With scrimmages held during practice every Friday, Rastelli and Alexakou said that the break-in games can only be a good thing for their team.

Alexakou mentions how imperative it is that the team gets back in shape before January. The athletes have not played volleyball since December 2019, making them prone to injury if they were to dive right back into games without adequate preparation.

“This is a situation no one was hoping for,” Rastelli said, “but we must adapt.”

While the postponement of the season may have been beneficial in the end, the overall situation is one that everyone would much rather not be in. Rastelli also stated the team is made up almost entirely of international athletes, who were left wondering what their future held when their athletic and academic life here in the United States was put on hold. The uncertain times left countless athletes wondering if they would have a chance to continue playing in the United States. However, luckily some of their worries were put to rest with the return to campus and official statement of the season resuming at a later date.

“I am grateful to be back at St. John’s playing volleyball,” Rastelli said.

What’s next for the Red Storm?

With the postponed fall season, Rastelli and Alexakou agree that this will allow time for the team, especially new members, to improve on their skills and form a bond unlike any other. They mention how in terms of attitude, not much as changed from last year. The COVID-19 pandemic has only brought a stronger drive for success, as Rastelli and Alexakou do not want this allotted extra time to go to waste.

On top of the undoubted determination, Friday scrimmages and practices throughout the week certainly aid in the improvement of the team. Rastelli and Alexakou are excited to take this time to get to know their new teammates and improve upon last year’s game as much as they can.

While last year’s win established a newfound sense of pride, it only goes so far into this season. Rastelli and Alexakou are determined to not let the effects of the COVID-19 pandemic bring them down – through hard work and with positive mindsets, the team can only improve. Despite uncertain times, athletes cannot forget to relish in the achievements of the past and look forward to future successes.