Building the culture: What to expect in Mike Anderson’s second season 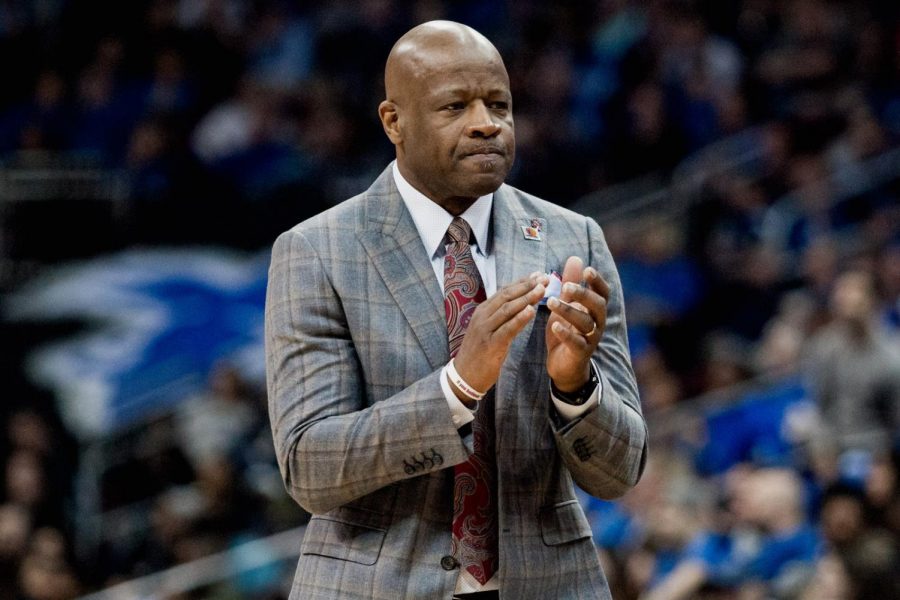 When St. John’s Men’s Basketball Head Coach Mike Anderson stepped into Carnesecca Arena for the first time, he had just been named “one of the most successful coaches in Division I over the past two decades.”

A year later, he is no longer just in Carnesecca Arena – he is home.

“When you come in [as a first year head coach], you’re creating a culture, a style of play, that guys aren’t used to playing,” Anderson said during this year’s Big East Media Day, which was held virtually on Oct. 28, “but I thought we saw it in effect down the stretch. Hopefully, we can build upon that.”

The Red Storm was the last college basketball team to take the court earlier this year during the Big East Tournament on March 12, in a game against Creighton at Madison Square Garden; the matchup was cut short at halftime due to the coronavirus outbreak. St. John’s seemed to be warming up, coming off a big win versus Georgetown and holding a three-point lead at the half of their final game.

Just hours before Anderson spoke at Media Day last month, the St. John’s Men’s Basketball team was predicted to finish ninth in the Big East Conference Preseason Poll. This prediction, however, will have minimal impact on how the team will continue to prepare for the season.

“It is just someone’s opinion,” Anderson said, “and all it means is that we have to continue to work and prove that we can be the best team we can be.”

Returning players expressed similar feelings about the ranking and said that they know how hard the team is working for the upcoming season.

“We are not really into the polls or politics, or anything like that,” senior Rasheem Dunn said. “We are just working to be a better team.”

Dunn, Greg Williams Jr. and Julian Champagnie spoke to Anderson’s coaching style and how he is trying to push the team to be the best that they can possibly be. They all agreed that not much has changed about the pace or approach from his first season in the Big East Conference.

“The only change I’d say this year is that he jumped right into it,” Champagnie said. “He didn’t really waste any time in terms of taking things slow. He knows exactly what he wants to do and he’s going to get what he wants done.”

Dunn agreed and added that Anderson has everyone energized. He said that Anderson likes the team and all they are bringing to the table this season, making him feel confident that the team will defy the odds that the current Big East ranking has stacked against the them.

Before the season was cut short, Anderson carried out the name given to him during his inaugural season through his fast-paced coaching style, fashionable game-day suits and passion for social justice initiatives. This upcoming season, Anderson plans to have the Red Storm pick up where it left off: hot.

Anderson said that the team’s depth this year will contribute to their culture and translate in their play on the court. He pointed out that the team’s returning “core players” — Williams Jr., Champagnie, Marcellus Earlington and David Caraher — will help find the balance he is looking for this season.

“The biggest key for me and my staff is getting all of these guys on the same page,” he said.

Anderson is optimistic, and aside from the preparation for this upcoming season, he said that he is glad to bring back some normalcy for himself and the team amid the COVID-19 pandemic “from the standpoint of playing basketball.”

“We’re taking [it] day by day,” he said, “and the kids are doing the right thing, coaching staff is staying on top of it and we’re going to try and make it as normal as we possibly can.”

Anderson has demonstrated his desire for his team to be vocal as global citizens on several occasions; the most recent being this past September, when he orchestrated a voting registration event for his players, encouraging them to participate in this year’s general election. The Birmingham, Alabama, native said he has experienced everything that is going on as a Black man in America , which makes his position as a leader to the team even more impactful. He said it is all about opportunity, and when the players take these opportunities to enact change, then the team is promoting “the United States of America.”

“The thing I’ve been proud of these guys is that they want to come back and make a difference — a difference in their community and a difference at St. John’s,” Anderson said.

Over the summer, Anderson said that the team had conversations via Zoom, WebEx and eventually, in-person, regarding the social injustices occurring across the country. He said that the sports aspect is just something that brings people of all races and beliefs together, adding that the work that goes on behind the scenes –– community service, reading sessions, etc. –– is what really makes an impact on the community.

Most recently, Anderson became a member of the Advancement of Blacks in Sports (ABIS), a non-profit organization committed to motivating people to advocate for justice for Black people involved in sports. Anderson is also part of the organization’s Student Athlete Internship Initiative Committee, but regardless of his affiliation with these organizations, Anderson truly wants his team to be active members of their community.

On and off the court, Anderson continues to develop and enhance the impact that the members of the St. John’s Men’s Basketball team leave on their fans. He not only has experience from his first season in the Big East to build off of, but also a team of support inside and outside of Carnesecca.

“I just love the competition,” Anderson said. “When practices are as good as the game, the practices are like war and the games are fun. I’m getting the feeling that that’s gonna take place with this team.”