Hometown hero: Rasheem Dunn prepares to finish where he left off 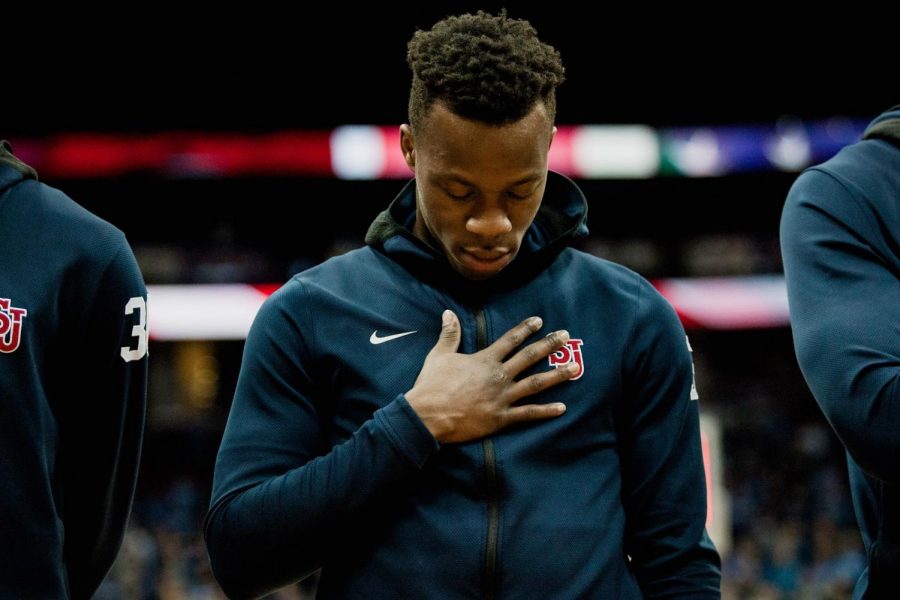 St. John’s Men’s Basketball Guard Rasheem Dunn was about eight hours from home during his sophomore year of college, playing for the Cleveland State Vikings. As a player on the Red Storm’s roster, he is finally back home.

To be able to play in his home city in front of “New York’s team’s” devoted fans is extremely important to Dunn. More than that, to get to play every game in front of his mother during the 2019-20 season – well, he couldn’t ask for more. When he received the news last season that his NCAA waiver had been lifted, he couldn’t help but think of everything she had done for him along the way.

“I was happy for myself,” Dunn said in a profile interview back in February. “But I was more happy for my mom … to actually play in front of her, to see the smile on her face, there’s nothing like that.”

Going into his senior year, the expectations are high for Dunn in the upcoming 2020-21 season. Transfer regulations already gave him a late start to the game last season but Dunn unfortunately had his time cut even shorter when the COVID-19 pandemic abruptly ended it. As a redshirt junior, Dunn had little opportunity to showcase his talents with the Red Storm.

For the talent he was able to show, his mother was present every step of the way. She saw her son on the court during every game and was there for the last game of the 2019-20 season, when things took a turn. She was there that day in the stands of Madison Square Garden to see her son play 36 minutes of fast-paced basketball, scoring nine points, six rebounds, five assists and three steals.

Dunn originally played for St. Francis College in Brooklyn from 2016-18, where he led the team in scoring 13.1 points per game and achieved 394 points overall, setting a freshman record. He also set a Terrier record by making 112 free throws, and led the team in rebounds and steals during that season. Dunn was named the NEC Freshman of the Week three times and became the first St. Francis freshman to put up more than 20 points in a single game since 2009.

Dunn left the Terriers in the 2018-19 season to play for Cleveland State, where he had to sit out due to NCAA transfer regulations. After Cleveland State, Dunn transferred to St. John’s and, as a Brooklyn native, he is very excited to be back in New York playing basketball.

“It’s been a good experience playing in our hometown,” Dunn said of getting to play with fellow New Yorker teammates again. “Allowing everyone to support us who’ve been supporting us since high school [during this time].”

Dunn emphasized the number of offers he was receiving from colleges when he was at Cleveland State. It was New York’s calling that drew his attention to St. John’s, as he said that playing for the people who have supported him throughout his basketball career — “that’s special.”

During his junior college basketball season with the Red Storm, Dunn appeared in 29 games, scoring in double-figures 21 times.

“I try to be the best person I can be on and off the court for my teammates,” Dunn said during Big East Media Day, which was held virtually late last month. “We try to push everyone to be better than they were.”

Dunn feels that consistently putting your best self forward and always trying to improve is the way to achieve success. He honed in on all that he is personally working on in his game, emphasizing that he is “working on leadership skills, [his] jump shot and being more patient.”

“In practice we go hard to outshine the day before,” Dunn said.

The Big East Preseason Poll results, which ranked the Red Storm to finish ninth in the Conference, aren’t discouraging Dunn. He said the team is just pushing to be better everyday, regardless of what people think.

Dunn and his teammates are determined to not let the criticism get to them. The team knows they are working hard, and they are excited to debut their hard work and the progress they’ve made when it comes time to step on the court.

Ending the 2019-20 season short, it felt like someone had pressed a reset button. To make up for lost time due to the COVID-19 pandemic, Dunn hopes to help his teammates grow this season. He plans on “being more vocal to my teammates, pushing them even harder and continuing to push them to be better than what they think they are.”

As a leader, Dunn noted that it’s important for the newer players to understand their surroundings.

The players of the St. John’s Men’s Basketball team – Dunn included – intend to carry their pre-pandemic mentality into this season.

“I believe we are going to take that energy into this season,” Dunn said. “We plan to just continue to lead the team and push everyone and continue to be the best version of us.”

It’s not only trying times for the team and their performance, but this season will be the Red Storm’s first time in the paint that fans – including Dunn’s devoted mother – will not be in the stands watching. Regardless, Dunn and his teammates are confident they are going to come back better than before. With time to grow physically and mentally, as well as time to realize where he needs to adjust his game, Dunn is maintaining a positive outlook for the new season.