Leilani Correa: Adding to the accolades with a fresh mindset 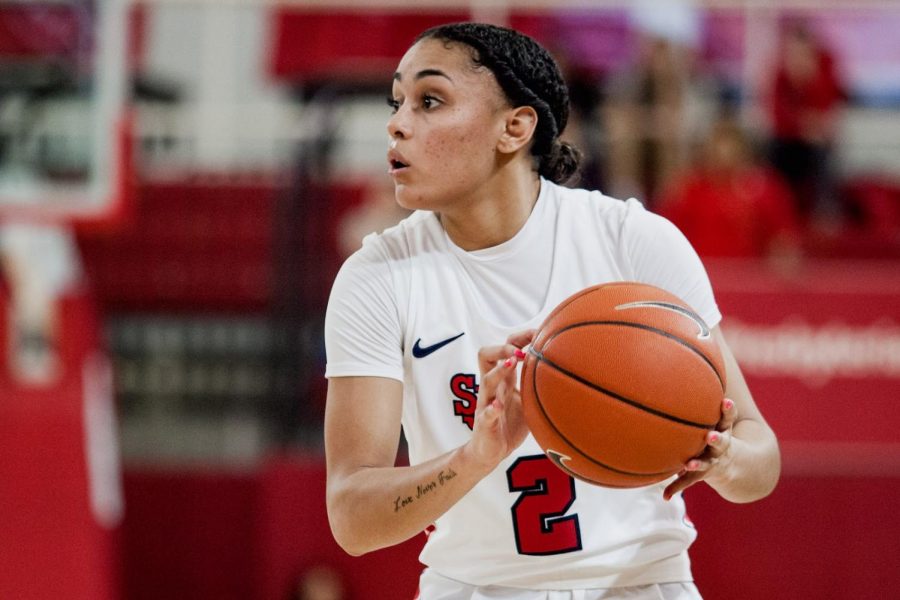 In the beginning of St. John’s Women’s Basketball Guard Leilani Correa’s college career — just over a year ago — there was worry she would not be able to participate in her freshman season. Waiver concerns made Correa even more determined to make it onto the court and push herself to her full potential. If all else failed, she wanted to prove she deserved a spot with her new team.

After one of her practices last November with the Red Storm, Correa huddled with her teammates and coaches as she routinely did. To her surprise, it was announced she would be able to show off her talents during the 2019-20 season, as all waivers passed, allowing Correa to play. As teammates shrouded her in hugs, Correa immediately knew it was time to make her mark among the “top dogs.”

She wasted no time.

Correa is going into her second year with the Red Storm with some impressive statistics from her freshman year to build upon. She is expected to be a key contributor to the Red Storm Women’s Basketball Team this season and having been the only freshman in the Big East Conference to record at least 30 points in three games, she was one of the best freshmen in the country last season.

During her first season with the Red Storm Correa received the Big East Sixth-Woman Award, was selected to the Big East All Freshman Team and the Big East All-Tournament Team, was an All-Met Third Team Selection, obtained the Her Hoop Stats Honorable Mention, was named MBWA Co-Player of the Week, was a four-time Big East Freshman of the Week and, to top it all off, she was selected by ESPN as one of the top 10 impact freshman in women’s college basketball. These achievements are all a product of her amazing work, as Correa averaged 12.8 points per game and hit a record high 33 points last season in the team’s victory over the Army Black Knight’s Women’s Basketball team.

During Big East Media Day, Head Coach Joe Tartamella shared that Correa did not participate with the team in the summer leading up to her freshman season, yet she still managed to earn over 20 points per game, along with being an overall outstanding defensewoman.

Tartamella did, however, state that while her performance is remarkable for a younger player like herself, “we’re talking about consistency.” Correa is only a sophomore – this means Red Storm fans have a lot to look forward to in upcoming seasons if her incredible game continues. Consistency is key and Tartamella believes Correa has a better grasp of that now with a season under her belt.

“The way she performed in the Big East Tournament is something we’ve never had,” he said.

Tartamella also noted how being able to see Correa shine in big games like the Big East Tournament allowed the coaching staff to see her grow as a player. He emphasized that what they saw only made the staff want her to keep playing.

“She’s somebody who probably could’ve started in every game,” Tartamella said.

“She wants to do what’s best for the team,” he said. According to Tartamella, this outlook is believed to be the root of her success and the reason why she won the Big East Sixth-Woman Award in just her freshman year.

Tartamella explained that he feels many young players fail to recognize that quick college success leads to roadblocks in the seasons after. He alluded that this feeling of “hitting a wall” can impact a player’s performance. Yet, he expressed that after having experienced one season of play, Correa is working on her mentality as well as her skills on the court.

“My mentality going into freshman year was a little iffy,” Correa said, “but throughout the year I got better and improved as a player.”

For Correa, the desire to grow this season isn’t just on a personal level; she shared her fondness of her team during a video interview for Big East Media Day.

“I’m really confident in our team this year and to see our team grow throughout the season,” she said.

Correa’s focus on building up her mind and body greatly excites fans and staff, according to Tartamella. He feels that the year of experience Correa gained will aid in “filling in gaps that were maybe there last year.”

He also emphasized that Correa has a new understanding of her body and the demands for it, which helps in knowing what approach to take to improve it. All of the effort that she has been making shows her eagerness to improve over the years with St. John’s, and this is something that Red Storm fans love about their athletes.

“It’s good when no one knows who you are for a little bit,” Tartamella said on Correa’s sudden but powerful rise to stardom. “She’s certainly a big piece for what we do for the rest of the year.”