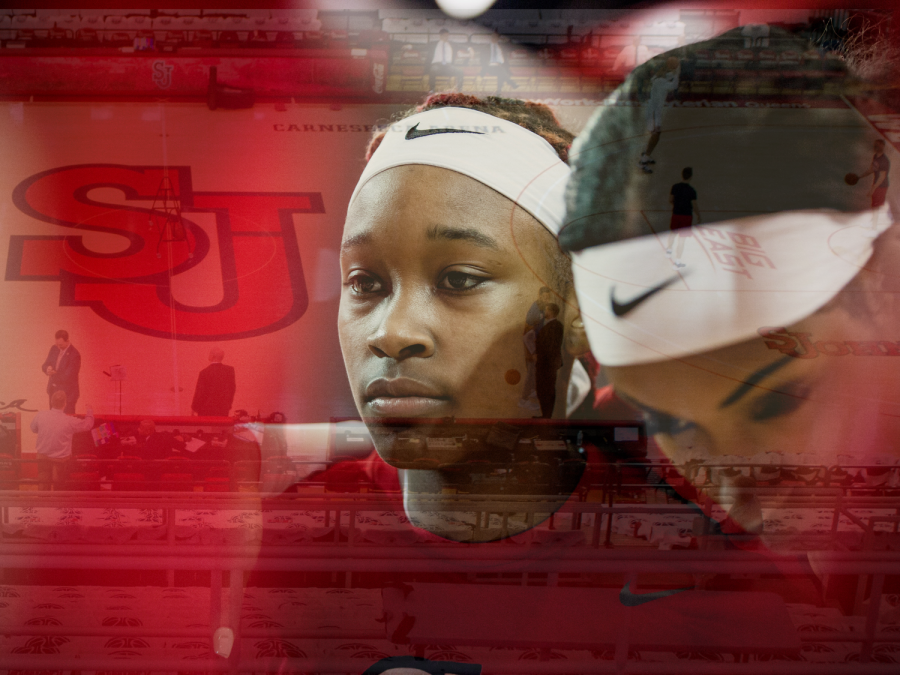 More than 5,000 seats surround the basketball court inside Carnesecca Arena. It has hosted some of the most energetic college basketball games in the nation. But, it’s more than that. It’s a place where athletes get together and become more than the sport; more than the players.

For the St. John’s Women’s Basketball team, playing on this court also means pushing for change by stepping up and speaking out on social injustices in the United States.

Stepping up
This past May, during the height of mandated lockdowns and social distancing guidelines that were implemented across the country, a Minneapolis man by the name of George Floyd was killed by police as bystanders recorded the incident. What followed was a summer of tense protests across the nation. As of Aug. 31, 2020, United States police officers had killed over 164 Black men and women across the country, many of such cases which are still under investigation, CBS News reported.

In response, NBA and WNBA players used their platforms as athletes to voice their desire for tangible change in this country. The NBA allowed its players to choose from a list of 29 social justice messages to put on the back of their jerseys, replacing their last names. On top of this, the court in the 2020 NBA Bubble, an isolation zone for players throughout the NBA playoffs, had ‘Black Lives Matter’ painted across its wooden floorboards. When Jacob Blake, a Black Wisconsin man, was shot seven times in the back by Kenosha police officers and left paralyzed from the waist down in August, players went on a strike in the middle of playoffs.

What does this mean for college athletes on the Red Storm? The St. John’s Women’s Basketball team is taking this time to stand up with these professional athletes, and reflecting on the individual impact their choices and the choices made by the Big East Conference have on their communities.

“We’re in a moment in time when athletes are using all their levels to use a platform to be able to speak out on the issues of social injustice,” Head Coach Joe Tartamella said during virtual Big East Media Day.

The Red Storm knows they are more than just athletes and the Women’s Basketball team has consistently shown their fans that they know this; on Juneteenth, they released a video on Twitter, speaking up for the Black men and women who have lost their lives to police brutality.

“This is our fight,” the team said in the video. They echoed the sentiment that many across the country have been chanting in the streets: “Black lives matter.”

Stepping out
The Women’s Basketball team also recently dedicated seven days of practice in November to raising awareness of social injustices – like police brutality – in America.  Every member of the team wore a black T-shirt with the word ‘Seven’ written on the back during these seven days of solidarity to demonstrate that they are not only aware of these injustices, but are speaking up on the matter and will not stop until change is seen.

The Big East Conference also made the decision to put a Black Lives Matter (BLM) patch on all players’ uniforms, effective this season. Big East Commissioner Val Ackerman said that the Big East hopes that their BLM initiatives, with the help of their players, “can help our country bridge its protracted racial divide and allow us, once and for all, to live up to our national ideals of equality for all.”

“It’s amazing to see,” Tartamella said of these intiatives. “I think those are big things so certainly this is going to be an everyday conversation, it’s not going away.”

Tartamella said that he believes the University is providing its athletes with the proper resources to ensure that they are using their platform for such initiatives and called out the University’s rich history, including former coach Joe Lapchick.

Lapchick was the head coach for the St. John’s Men’s Basketball program from 1936-47 and later became the first coach in the NBA to sign an African-American player, Nathaniel “Sweetwater” Clifton.

Lapchick’s historic career showed that social justice is deeply rooted in the basketball programs here at St. John’s and is reflected in the work that current players on the Red Storm rosters – both men’s and women’s – are doing in the fight for equality in the country.

Making sure they are heard
Tartamella said he sees all of the things the team is talking about and doing for these injustices.

“They’re trying to build themselves,” he said, “along with being registered to vote and making sure they are going to vote to have an action plan, not just to talk about it.”

Hoppie is one of the biggest leaders on the team’s roster this season, and she is ensuring that the team’s voice is heard. She said that the team is seeing players from professional leagues stand in solidarity against social injustices, which inspired them to do the same.

“We knew that we couldn’t do exactly what they [WNBA players] were doing,” Hoppie told the Torch in a Zoom interview, “but we wanted to do something. We didn’t want it to just fly by and not say anything.”

Hoppie dove deeper into the meaning behind the black tees they designed to wear during seven days of practice, explaining how wearing the shirts for seven days portrayed just how important it was to stand in solidarity and show that their voices matter.

“We were very happy that we were able to be a part of that moment,” she said.

The team has seen the difference the small steps for justice have made and plans to continue carrying out their message during their upcoming season. Those seven days were not the end to their fight.

Hoppie said that throughout the season, the team just has to stay up to date with what is going on, both in the news and on social media. She emphasized that “every couple of months, every couple of weeks” there is always a newsworthy event.

“Being aware of what is going on around us is gonna make us be a part of this fight even more,” Hoppie said.

Being both a part of the fight for social justice and speaking up about it are two driving factors in the Women’s Basketball team’s initiatives for social justice. Without these voices, initiatives and moments of solidarity, they would have to fight a lot harder to make their voices heard. In order to push for change there must be steps for justice, and this team is doing all that they can to take a step in the right direction.