Life after the storm: Charlie James has a new match in New York City 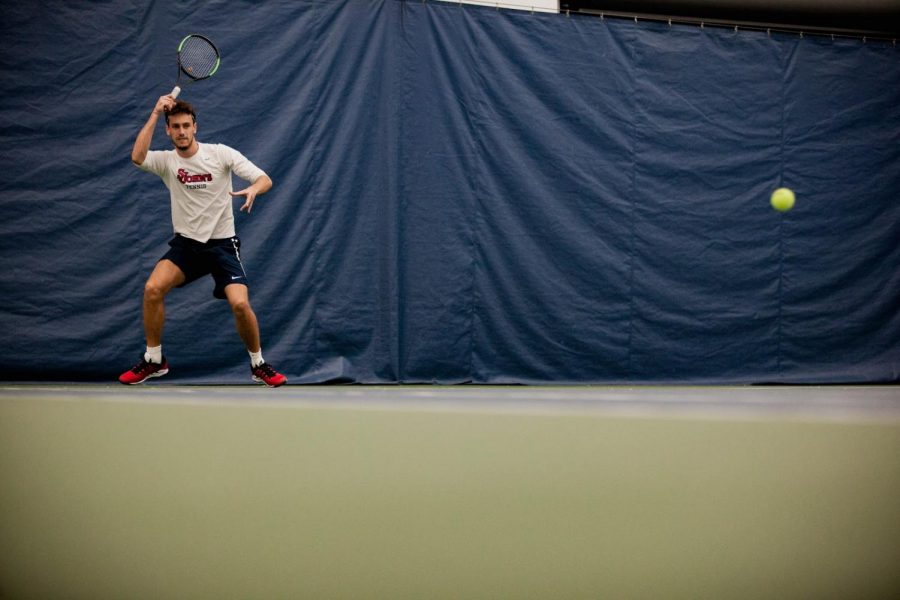 What is now his career on the St. John’s tennis court just outside Taffner Field House will one day hopefully be one on Wall Street. Men’s Tennis Junior Charlie James came to Queens all the way from Cambridge, England, looking to not only to pursue tennis in the United States, but also get his foot in the door of the hub of finance in New York City.

James began playing tennis around the age of four after watching the Wimbledon Tennis Tournament on television with his parents. He told his parents that he wanted to try it out – tennis has been a part of who he is ever since.

To work on his skills, James joined different club teams and played wherever he could. He went to a boarding school in England for high school, which James describes as a “mini uni” – and played tennis every day. The people who he played both with and against were at the same level of talent as himself, so it was very enjoyable and inspired him to take a bigger leap of faith on the game he loved so much.

“The older guys would go to America to play in university,” James said in a Zoom interview with the Torch, “and would come back and say how great it was, so it helped me want to go to America.”

Though he knew that universities throughout England and other areas of Europe were still an option, by the time he was 16 years old,  James knew that he wanted to play in America.

Since starting at St. John’s in 2018, James has helped the Men’s Tennis program earn big victories.  He began by mostly playing in doubles matches while moving more toward a split between both doubles and singles sophomore year, and will keep that balance going into his junior year.

What will stick with him long after he leaves St. John’s?

“Winning Big East my freshman year,” he said, “for sure.”

The team was down 3-0 going into the final match, but managed to come back to win it 4-3, securing the Conference Title. He called the experience “crazy.”

James recalled another memorable moment from his sophomore season during  one of the last matches before the COVID-19 pandemic put an early end to the season. The match was not going well for the team but James was able to help the team make a comeback, beating their Ivy League opposition, the University of Pennsylvania. James put up the winning point during the match, bringing the team from a 1-3 loss to a 4-3 victory.

“We were behind,” he said, “and coming back from behind, especially [against] an Ivy, is still crazy to me.”

James said he is not sure if he sees tennis playing a role in his future.

James is keeping the legacy of working in finance, as his father works in the same field back at home in England. Since tennis is a main part of James’s life right now, he is using it to his advantage to network with people in the finance field, and is looking into possibly working in a sports agency within his interest in the finance field.

“It has helped me meet people and build relationships with people,” he said of the networking opportunities tennis has brought him.

James says he likes life in America, and while the possibility of going back to the United Kingdom is always on the table, he said there are more opportunities in the financial field here, especially in Manhattan.

“I like to take things as they come,” James said, relaying that he will see where the future takes him. James is going into his future ready for anything, and he has a solid foot in the door with a major lesson that the tennis program taught him.

“The team is bigger than the self,” he said, and this is a lesson bigger than tennis; it’s a life lesson that will one day be useful in an office overlooking the cobblestoned blocks of Lower Manhattan’s iconic Wall Street.