Red Storm on the Road to March Madness 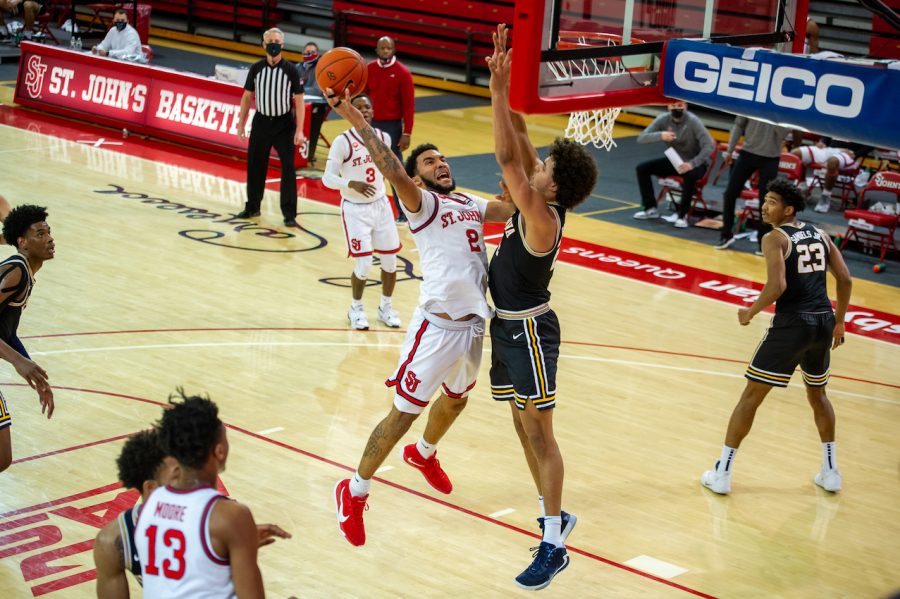 As the Villanova’s Men’s Basketball team bus drove away from Carnesecca Arena on Feb. 3, all the team could hear was the echoing sound of “New York, New York” by Frank Sinatra. This sound came from speakers of St. John’s students standing outside of Gate 4. This is the first time fans have come to cheer on the Johnnies in-person since the beginning of the pandemic.

The music kept playing as the victorious St. John’s Men’s Basketball team emerged from Taffner Field House. This was their fifth win in a row, the longest streak of the season thus far.

During the game, the Johnnies outscored the Wildcats during both halves. Freshman Posh Alexander led the team in scoring, putting up 16 points on the board. Following him were sophomore Julian Champagnie with 14 and junior Vince Cole with 12.

Strong on offense and defense, St. John’s was able to hold their lead and attack the entire game.

After this victory, the Red Storm claimed another win against Providence, 92-81, on Feb. 6. This six-game win streak became a big factor in moving the team up in the ranks in the Big East Conference and in the NCAA, increasing their likelihood to play in college basketball’s biggest event of the year: March Madness.

Many students have reposted the Men’s Basketball team’s posts on their Instagram stories, showing off their University’s win against a nationally ranked team. These students are not alone, as multiple social media platforms, including the official March Madness Instagram page, also posted an update about the victory, calling it an “upset.” Even big news organizations, such as the Associated Press, have reported on the takedown of Villanova by the Red Storm.

In today’s rankings, St. John’s is 7-7 in the Big East, ranking fifth in the conference, tied with UConn. Outside of the Big East, the team has a record of 13-8, allowing March Madness to reach eyesight.

It seems as though the mindset of the Men’s Basketball team, as well as the Red Storm fans, has shifted since their victory against Villanova. The energy on the court as well as throughout campus has grown immensely. Recently, Governor Cuomo announced that sporting events can have a fan section of 10% starting on Feb. 24. With this news, hopefully those fans standing by Gate 4 blaring “New York, New York” and supporting the team across social media platforms will be sitting in the stands, cheering on the Johnnies and every other team for their upcoming seasons.