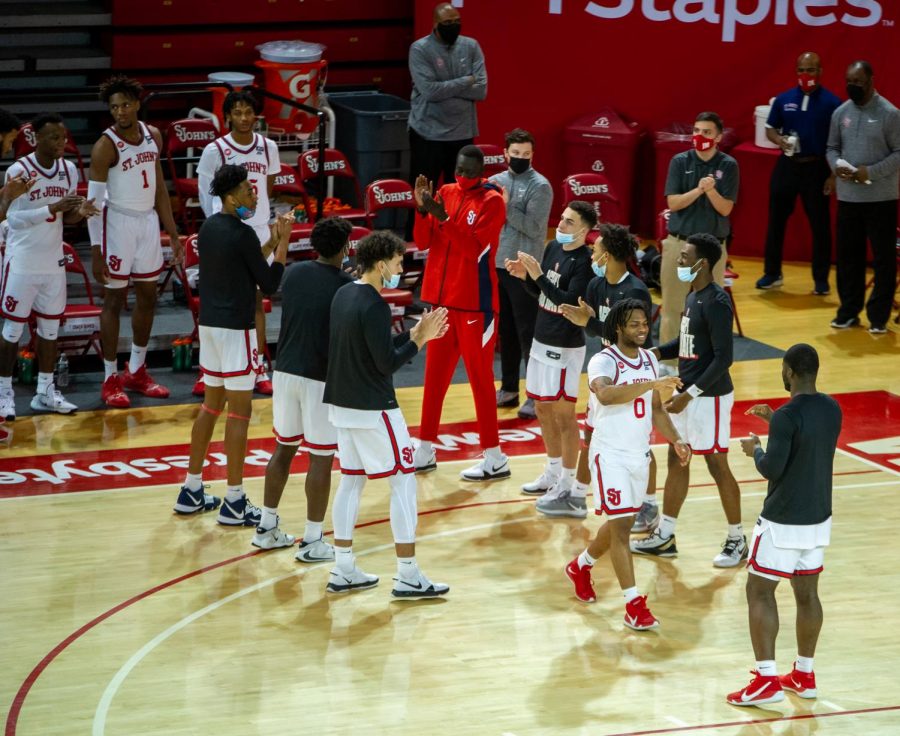 The Red Storm’s run in the Big East Tournament at Madison Square Garden came to an end after an overtime loss to Seton Hall, 77-69, this past Thursday, March 11.

Seton Hall took a slight halftime lead at 33-32. The game flipped back and forth but St. John’s bounced back, outscoring the Pirates 30-29 in the second half to tie the game at 62-62. But the Pirates came out victorious in overtime, scoring 15 points in the five minutes to the Red Storm’s seven.

Thursday’s game was Julian Champagnie’s 25th of the season and his 25th time scoring double digits, achieving a team-high 16 points on 7-of-21 shooting with nine rebounds. Champagnie did not make 14 of the 21 shots he took throughout the game, and had trouble scoring in the second half.

In the postgame press conference, Head Coach Mike Anderson spoke about the night as more of a learning experience than a loss.

“It was a good chance to learn about Big East basketball,” Anderson said. “Our guys have nothing to hold their heads down about.”

Senior guard Rasheem Dunn, who scored 15 points, was open in the post-game conference  about the disappointment he and his teammates felt. The Red Storm faced a lot of adversity together, playing as a “one goal, one mindset” group, according to Dunn, and to face such an early loss to the Pirates was devastating.

“It was just that type of night,” Dunn said. “They just wanted it more than us tonight, it shows out on the court.”

Dunn also spoke about the return of Big East Freshman of the Year and Co-Defensive Player of the Year, Posh Alexander, who scored six points and three steals. Alexander returned to the court for Thursday’s game after suffering a thumb injury against Villanova on Tuesday, Feb. 23, that kept him out of the last two games of the regular season.

“Not practicing for a while, missing the last two games, he kind of had to get himself back in the groove,” Dunn said.

Two hours before tipoff, it was announced that junior forward, Isaih Moore, would not be playing in the quarterfinal after he was contact-traced to a COVID-19 positive staff member within their program. No other athletes or staff members were exposed, and therefore did not have to quarantine.

Dunn said that Moore’s absence had  an effect on the outcome of the game.

“It hurt us a bit,” Dunn said. “Isaih gives us much more length inside.”

“Without a doubt, his versatility, his grip, his basketball IQ opens up the floor, not only that but he’s one of our better rebounders as well,” he said.

Despite setbacks and an early loss, the Red Storm is hopeful about the successes to come in future seasons.

“It’s a new basketball team,” Anderson said. With a team stacked with underclassmen, he knows the importance experience plays on the court and he attributes that to his team’s loss against Seton Hall.

While lack of experience may have been a drawback for Thursday’s game, Anderson and Dunn feel the Red Storm has potential to someday rise even higher than their fourth place conference standing.

“This team is going to be really special in the future,” Dunn said.