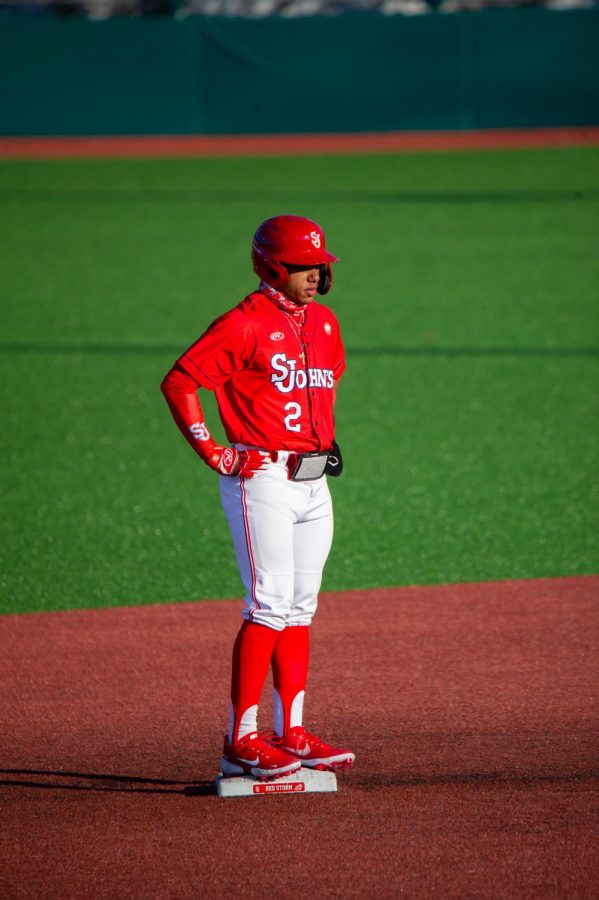 You could say David Glancy’s baseball career began when he was just five years old  —  he picked up a bat in his backyard and started swinging. Inspired by his grandfather, Glancy saw sports playing a big role in his life from the very start. Now, he’s playing for a Division I baseball team, hoping to develop a promising career on the field.

As a redshirt freshman, Glancy lost most of his first season to the halt in sports due to the pandemic. Yet, in just the nine games he played, there was little left to the imagination for fans. He started five of those nine games and put up a .423 batting average with 12 RBIs and three home runs.

Baseball runs in the family, Glancy told us.

“My grandfather was a really big influence on me and basically the reason I’m the person I am today when it comes to sports,” Glancy told the Torch in a Zoom interview. Glancy’s grandfather played football at North Carolina State and was an umpire for 55 years before retiring about 10 years ago.

When it came to playing baseball at the collegiate level, St. John’s wasn’t even on Glancy’s radar, and he wasn’t on theirs. St. John’s Pitching Coach George Brown had come to Red Bank Catholic High School to see Glancy’s teammate, Vinnie Bianchi, play in 2019. But Brown was also able to catch an eye of Glancy at that game, in which he hit a home run to win the Shore Conference finals. Coach Brown liked what he saw from Glancy that game and reached out to him.

At that time, Glancy was interested in going to another school. It wasn’t until his high school coach shared how much Brown liked him that he decided to tour the Queens campus and see what the University had to offer.

“I came for a campus visit, talked to the coaches and fell in love with it right after that,” Glancy said. “I just knew that this was the place I wanted to be and it’s been great so far.”

For Glancy, the shift from high school to collegiate-level baseball was like a walk in the park. He had played for a competitive travel ball team, always facing top players from top schools across the nation. On the field, it was never anything too crazy for him.

“The [velocity] was a lot harder everyday than high school,” he said, “but it was an easy adjustment and it wasn’t too bad.”

Glancy found that the hardest adjustment was the lifestyle that came with being a student-athlete. Between classes, the lengthier practices and figuring out time management, it was difficult at first. But after he locked down his routine, he was in the right groove.

Going into the 2021 season, Glancy put in the work to be prepared for the competition. He worked virtually with his trainer during quarantine, with the goals of gaining more weight and getting more physical.

“I’ve been doing the same thing with hitting, working out everyday, throwing everyday and just getting better each day, one day at a time,” he added.

For athletic inspiration, Glancy looks up to the Seattle Seahawks’ quarterback, Russell Wilson. Glancy explained that Wilson does a lot of things for his community. Wilson has a foundation known as the “Why Not You Foundation,” which is dedicated to “education, children’s health and fighting poverty, empowering today’s youth to lead with a why not you attitude,” according to the foundation’s website.

Glancy says Wilson does his best to be a good team leader and teammate every day, both on the field during games and in practice. He added that having a role model like Wilson helps athletes strive for more in their own game.

Now, with  in-person workouts, practices and games in the mix, mentality has been everything to Glancy. He’s simply happy to have the opportunity to be back out there and to be playing every day.

“It’s fun,” he said. “Last year we got everything taken away from us so just to be out there is great.”

After having this season cut short, Glancy realized that he could not take anything for granted. He said last year his mentality was so different because he didn’t realize how quickly the privilege of playing baseball could be taken from him. This year, that mentality has completely shifted.

“So just to go out there every day with that positive mindset and be lucky to be there would be my goal to just keep me going each and every day,” he said.

After many fall practices and intrasquad games, just a couple of weeks ago, the time finally came for St. John’s to play their first official game in almost a year. It was the moment the team was waiting for. Glancy expressed how the fall routine the team had is nothing compared to the action of facing other teams.

“Running around a field and being with my teammates felt like I was playing baseball for the first time again,” Glancy said. “We were all being ourselves and it showed that we can play like that [well] when we just have fun.”

All athletes have moments that truly challenge them. For Glancy this occurred during one of the matchups just a couple of weeks ago.

The UMass Lowell pitcher was waiting for Glancy to make a mistake up at bat. Staying true to his game, he backed off the plate and created more room for his arms to extend.

“I always try to stay with myself and not do too much,” Glancy said.

He also said that staying relaxed is something that always helps in situations like this, no matter what level he is playing at.

“Finding my breath and keeping my mind extremely calm is important because I feel that if your mind is calm, you don’t think too much, so you just go up there and just have fun,” he said.

Looking ahead, Glancy seems to have a lot to show Red Storm fans, and has a good mentality to do so. He is excited to see how the team does throughout the season, being that the pitching and defense are looking good and the offense is beginning to find its groove.

With his new mentality this season, it seems Glancy will leave everything on the table. From home runs to RBIs, fans will be seeing him cross the plate and helping the team advance.