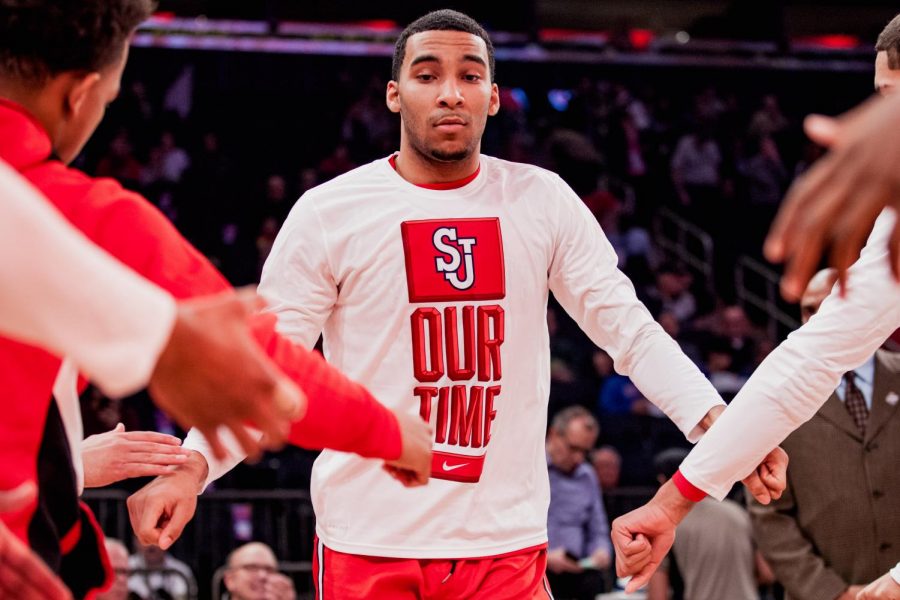 The Red Storm welcomed back junior guard Julian Champagnie after his withdrawal from the NBA draft process on July 4.

Champagnie worked out alongside the Celtics, the Nets and the Bulls during his time at the draft and participated in the draft combine in Chicago. He was scheduled to work out with the 76ers and the Pacerslater in the week, but Champagnie made his decision before those workouts to no longer continue the process.

Had Champagnie stayed in the draft, it was expected for him to have been a late second-round pick; the NBA advisory board gave him a mid-to-late second round draft grade.

This anticipated ranking was not enough for the 6-foot-8-inch Brooklyn native who felt that the only way he would enter the NBA would be as a first-round pick, otherwise it was back home to New York.

Back home he went, for now, as Champagnie claims “there is more work to be done” with the Red Storm.

Champagnie has been a remarkable asset to the Red Storm, averaging 19.8 points and 7.4 rebounds, leading the team to a 16-10 record with a fourth place finish in the Big East, along the way obtaining a league record of 10-9. The team also obtained a win in conference play for the first time since the 2014-15 season, as well as earning their highest seed rank in the Big East Tournament since 2000.

Personal achievements for Champagnie with the Red Storm include a notable rookie year with an average of 9.9 points and 6.5 rebounds. Such stats propelled him to Big East All-Freshman honors in the 2019-20 season, earning All-Met Rookie of the Year after a top three finish in scoring, rebounding steals and blocks for the Big East, and starting 26 out of 32 games where he achieved double digits 17 times, two of those times reaching 20 points.

“Julian used this pre-draft process the way it was intended, getting important feedback that will make him a better player and prospect in the long run. We look forward to helping Julian develop in any way we can,” said Head Coach Mike Anderson on Champagnie’s departure.

While St. John’s is happy to have Champagnie back, his time with this year’s NBA draft is an exciting look ahead for Champagnie’s future in basketball.