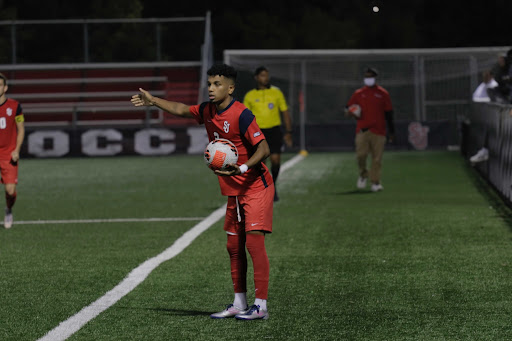 A challenging week of St. John’s Athletics is in the books as Men’s Soccer, Women’s Soccer, Volleyball and Cross Country all worked through rough patches in Big East Conference competition.

The Red Storm Soccer program has been a bright spot for St. John’s Athletics through the fall semester, but they stumbled last week against tough conference opponents. It was something that the avid fan might have seen coming, as the Men’s Soccer team has had offensive struggles all season—they are tied for 119th in Division I with just 3.92 points per game.

Those offensive struggles were masked by a tremendous defensive effort led by Lucas Bartlett and Rafael Bustamante. St. John’s goalkeeper Luka Gavran has held down the goal, allowing just 0.57 goals against average (GAA), a goalkeeping statistic that tracks average goals surrendered. This defensive dominance had propelled the Johnnies to a stretch of seven unbeaten contests –– six wins and one tie.

Their scoring woes began to take a tangible toll last week as the Men’s Soccer team played two overtime matches. In the first match versus No. 25 Providence on Wednesday, Oct. 6, the Johnnies held one of the highest scoring teams in the Big East scoreless through regulation. After a defensive mistake in the second half of overtime, Providence finally broke through in the 101st minute to win the game 1-0. It was another match where the defense proved itself to be one of the best in the conference, but the offense didn’t play up to the level of competition.

It would have been easy for the Men’s team to lose their momentum after a crushing double-overtime loss, especially with a road match with unbeaten Big East leader Villanova looming on Saturday, Oct. 9. They didn’t. The Red Storm defense once again bore down and turned in another clean sheet, Gavran’s seventh of the season. In their third straight overtime contest, Lucas Bartlett kicked a game-winning penalty kick to walk off the pitch at Villanova. The 1-0 victory stopped the bleeding for the Men’s Soccer team, but they still have a lot of work ahead of them on the offensive side of the ball.

It’s been a different story for the Women’s team, who started off tremendously on the back of Zsani Kajan’s 11 goals this season. When Kajan is contained by the opposing defense, the Red Storm offense stutters. In their two games this week, the Women’s Soccer team took two 1-0 losses.

In the first match on Thursday, Oct. 7, the Johnnies had quality chances by Kajan and Ava Collins on the road at Xavier. They couldn’t capitalize on those chances and Xavier’s utter dominance controlling the ball made a 1-0 loss look like a blowout. Xavier had 18 shots to St. John’s seven and had double the amount of shots on goal (6-3). Red Storm goalkeeper Naya Lipkens made five saves in an effort to preserve the match, but came up short in the 49th minute on an Ella Rogers goal.

The Women’s team aimed to rebound at home in front of SJU families for a Sunday afternoon matchup versus No. RV/24 Georgetown on Oct. 10. The match was part of a packed St. John’s University Family Weekend schedule, where families were invited on campus for the first time since pre-pandemic. The team couldn’t channel the energy into results, as Georgetown led the match in shots, shots on goal, saves and corner kicks. Lipkens made a save in the second half before Georgetown’s Gio Vicari sent the rebound into the goal, scoring what would be the winning goal.

St. John’s Volleyball began their two-week road trip last weekend with a pair of matches at Butler and Xavier. The team was swept in three sets at Butler on Friday, Oct. 8 but started to find a rhythm in the last two sets. After losing by ten points in the first match, the team played tighter, losing by only four in the second match and by just two in the final match. Reigning Big East Player of the Week Rachele Rastelli kept the Johnnies in the game with 13 kills, solidifying her role as one of the top players in the conference.

The team had a chance to rebound less than 24 hours later in a Saturday, Oct. 9 match at Xavier. It was another tight game, as St. John’s needed more than the minimum points to win two of their three set victories. Rastelli once again powered the Johnnies’ victory, with 21 kills in the match including two service aces.

St. John’s Cross Country finished second in the Metropolitan Championships on Friday, Oct. 8 at the historic Van Cortlandt Park in the Bronx. Key runners had to step up as St. John’s bona fide number two runner Katherine Bruno did not race due to calf tightness. Their number one runner Claire Cushing had a setback, finishing seventh overall and second on the team at the course she was victorious at just last month. Senior Mia Forster filled the void. Forster’s 19.26.1 5k time was enough to take second overall in the race and was just under 39 seconds faster than her previous season best. Cushing, Hannah Huleatt (12), Jenna D’Onofrio (43) and Tiffany-Ann Matturro (46) all scored points for St. John’s.

In Big East play thus far, St. John’s teams have shown flashes of championship potential. From one sporting event to the next, we’ve seen fantastic defensive performances, historical offensive performances and numerous individual accolades by Red Storm athletes. What we haven’t seen is these teams put everything together over an extended period. In order for these teams to reach their potential and contend for a championship, the Johnnies will need to make adjustments and find offensive and defensive success concurrently.