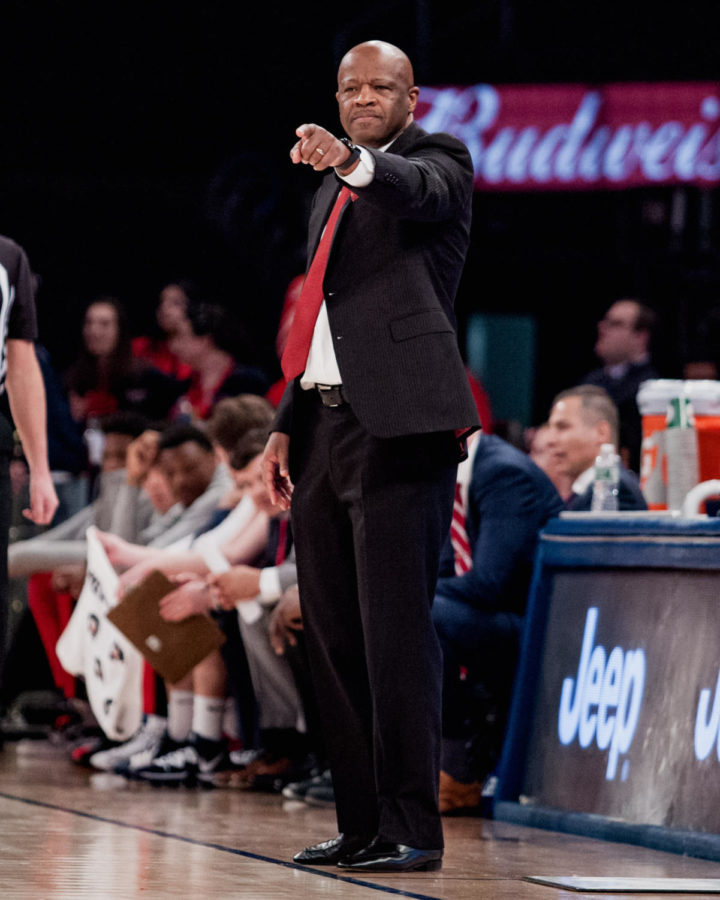 The suit, filed in federal court Sept. 23, claims that the men’s basketball program was tumultuous behind the scenes, alleging that COVID-19 protocols were “not being employed or enforced in any meaningful manner” and that the program faced “internal turmoil.” DeMeo is represented by Wigdor LLP, who in a statement co-authored by David Gottlieb and Renan Verghese of Wigdor LLP told The Torch that their intentions are to hold the University and Anderson “fully accountable.”

The University “categorically denies Steve DeMeo’s allegations of wrongdoing but cannot otherwise comment on pending litigation,” spokesperson Brian Browne told The Torch on behalf of the University. “Throughout the 2020-21 season, the Men’s Basketball team adhered to all University and Big East Conference COVID-19 policies and protocols.”

Anderson personally hired DeMeo as assistant coach of the men’s basketball program shortly after he was named head coach prior to the 2019-20 season. At the time, Anderson referred to DeMeo as “an important asset to the University” in a release from the Athletic Department.

DeMeo was previously diagnosed with the heart condition Mitral Valve Prolapse (MVP) about two decades ago, but his condition was mild and required only regular checkups. In one of those checkups last year, doctors discovered that DeMeo’s MVP had caused an irregular heartbeat and required surgery, according to court documents.

DeMeo notified the University of his need for medical leave in Aug. 2020 and underwent surgery to correct the irregular heartbeat, court documents claim. The suit notes that other health conditions were discovered in the process, and DeMeo required additional procedures and recovery time.

Issues began when Anderson and DeMeo met for an annual performance review after the conclusion of the 2020-21 basketball season. At the meeting, the suit asserts that Anderson praised DeMeo for his recruiting efforts and broad contributions to the program until DeMeo notified Anderson of his need for additional procedures.

“You have a job to do, you have to do it,” Anderson allegedly replied, and ended the meeting, according to the lawsuit.

Months after the meeting, DeMeo was informed of his termination from the University on June 8, 2021. It is standard practice in the industry to make performance-based coaching changes before the spring signing period.

DeMeo claims that his rapport with the players kept the team together in the final days of the 2020-21 season.

“The public success of the St. John’s men’s basketball team on the court masked a tumultuous end to the season,” the suit states. “Mr. Anderson lost control of the team and the players nearly revolted against him before the end of the season.”

This alleged turmoil centers around an incident within the program between Isaih Moore and Anderson during the final game of the 2020-21 season on March 6, 2021. In the game in Queens versus Seton Hall, Moore entered in the first three minutes. The forward played three minutes and missed two three-point jump shots before he was removed from the game.

The suit claims that Anderson was displeased with Moore’s shot selection and resolved to kick him off the team at halftime. When Anderson communicated this to the team, “what happened next could only be described as mutiny,” according to the suit.

It is claimed that the rest of the team refused to return to the court for the second half to “protest of Mr. Anderson’s unjust treatment of Mr. Moore.” The team did return to the court and played one of their best halves of basketball of the season, scoring 53 points enroute to a ten point victory over Seton Hall. Moore did not play a single minute of the second half.

The filing notes that Anderson tried to kick Moore off the team again in the days following the game, and the team further decided to refuse to practice if Anderson’s decision stood.

At this point, St. John’s had only the Big East Tournament remaining, where they prepared to face Seton Hall again in the second round. Two hours before the game, Anderson announced that Moore was unavailable because he was in contact with a COVID-19 positive staff member, but that no other players or staff were affected.

Senior Rasheem Dunn said that Moore’s absence “hurt us a bit” in St. John’s second round exit of the Big East Tournament. Dunn graduated following the season, and Moore and six other players on scholarship transferred from the program—an unprecedented number for a major conference team seemingly on the rise.

Moore transferred to Southern Miss for the upcoming season, and the Southern Miss Athletic Department did not respond to a request seeking Moore’s response to DeMeo’s characterization of events.

Despite an invitation to the National Invitational Tournament (NIT), the men’s basketball season ended when St. John’s announced they would not participate due to COVID-19 concerns.

“In truth, having refused to play for Mr. Anderson twice in three days due to what it believed was his vindictive and unfair treatment of Mr. Moore,” the suit claims, “the team simply did not want to play for him anymore.”

Anderson and St. John’s are now preparing for the first season of a six-year contract extension the parties agreed to last spring. DeMeo agreed to join East Carolina University’s staff as an assistant coach in August for the 2021-22 basketball season.

No court date has been set for the first hearing in DeMeo’s lawsuit.