Week In Review: Soccer Holds Down the Line in Queens 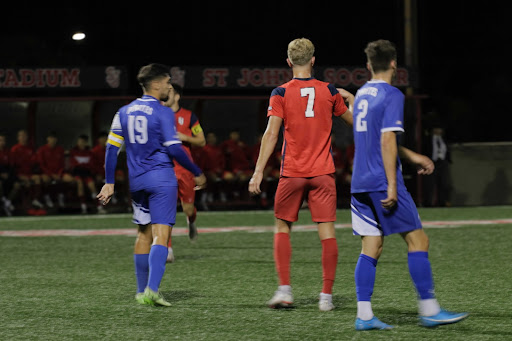 St. John’s teams all made significant progress in their quests for postseason contention, but only have marginal results to show for it. Some factors are no fault of their own, like unfortunate injuries, and others stem from an inability to capitalize on opportunities.

The Men’s Soccer team absolutely dominated Seton Hall on Friday, Oct. 16 at Belson Stadium, but came away with just a point in the conference standings for their efforts. The metro-area rivals played with a level of heart and energy not seen yet this season on RedZone’s “Red-Out” night. It certainly showed in the box score, with the teams combining for 47 total fouls and eight yellow card cautions on the night. Seton Hall’s Eden O’Leary was sent home in the 86th minute for his second yellow card, forcing the Hall to play a man down for the final four minutes of regulation and the two overtime periods that followed.

The Johnnies had 15 shots throughout the 110-minute draw compared to just five from the Pirates. It was yet another indicator of how dominant St. John’s defense, led by Top Drawer Soccer’s No. 94 player in the country Lucas Bartlett, can be night in and night out. It also showed how forceful the offensive unit can be when they control the ball movement and create good looks in the opponent’s zone. It’s clear that the Johnnies need to do a better job of finishing these opportunities since just two of their 15 shots were on target.

It doesn’t get any easier for the Red Storm, as they depart for No. 2 Georgetown on Wednesday, Oct. 20 in the nation’s capital.

For St. John’s Women’s Soccer, it was a tale of two halves in their Thursday, Oct. 14 matchup at Marquette. The Johnnies surrendered three goals in the first half, to just one of their own, heading into halftime. It was a totally different second half as the Red Storm defense held Marquette to just three shots. As they tightened up their defensive side of the ball, their offensive ball movement created more opportunities and the Johnnies scored two goals in the second half.

Ultimately, the team surrendered a goal in the first overtime period to end the game, losing 4-3. It wasn’t without progress since they found offensive and defensive rhythms throughout the match.

The Women’s team did find a way to snap their three game losing streak at Belson Stadium on Sunday, Oct. 17 versus Providence. The Johnnies were bailed out by a Friar foul that set up a penalty kick for Zsani Kajan, to which the team’s leading scorer drilled to score the only goal of the match. Aside from surrendering that penalty kick goal, Providence outshot the Johnnies nine to five, forcing Naya Lipkens to make five saves enroute to another clean sheet.

After a strong non-conference slate, the Women’s Soccer team is just 3-3-1 in the Big East and will need to adjust to survive the strength of the conference.

The Johnnies fell to league-leading Marquette on Friday, Oct. 15 in three close sets. They were swept by scores of 25-23, 25-23 and 25-22, which is impressive against a program that has only lost three out of 19 games this season. Rastelli was contained, by her standards, with 11 kills and a service ace on the night.

That was not the case on Saturday. In a road match at DePaul on Saturday, Oct. 16, Rastelli dominated the Blue Demons with 27 kills and an outstanding four service aces. It wasn’t enough to propel the Red Storm to victory, as they narrowly lost the match by a score of three sets to two.

After a two week trip on the road, the Johnnies return home to Queens having lost four of their last five matches. If nothing else, Rastelli has made it clear that she is a must-watch moving forward.

Cross Country’s Injuries Are Too Vast To Overcome

The back-end of the Women’s Cross Country team’s scoring five have improved remarkably through Saturday’s Princeton Invitational. Unfortunately for the Johnnies, their top two scorers did not race on Oct. 16, effectively eliminating them from team contention. All told, the Red Storm finished last as a team out of 21 qualifying teams.

The group’s top scorer, Claire Cushing, did not race due to a heel blister. It may be an explanation for Cushing’s regression at the Metropolitan Invite two Saturdays ago at the same course she won at in the opening race of the season. Katherine Bruno missed her second straight race with calf tightness.

The cuts that the back-end of the scoring five have made will be crucial to the team’s success when healthy. The two-week hiatus in preparation for the Big East Championships on Oct. 29 may give the Johnnies enough time to get healthy and compete for a title.

Each of the St. John’s teams are struggling to find a rhythm in Big East play. Despite their success in non-conference contests, it is apparent that the level of competition in the conference is much higher, and each team must adapt in order to compete. It seems to get worse before it gets better for the Johnnies, with each team facing some of the Big East’s best teams down the stretch. Even in losses and setbacks, it’s clear each team has the potential to make a stretch run at postseason contention.