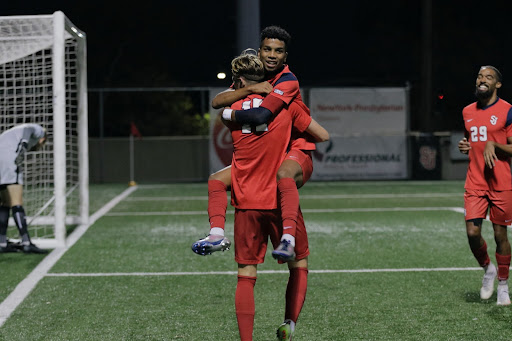 After struggling to score in multiple weeks, both Men’s and Women’s Soccer broke through to secure crucial wins against tough Big East opponents. In their only match of the week, Women’s Volleyball won convincingly and their top player received yet another conference honor.

Against far and away the best team in the conference, and quite possibly the best team in the nation, the Johnnies once again showed their defensive prowess at No. 2 Georgetown. In the match on Wednesday, Oct. 20 the Red Storm ceded just one goal to the Hoyas, who have scored 30 goals on the season and score 2.14 per match.

Brandon Knapp scored his fourth goal of the season to tie the game after Georgetown scored in the first two minutes of play. The Red Storm defense once again had an impressive showing, taking the match to double overtime. The Johnnies were just 38 seconds away from drawing on the road before Georgetown junior Aidan Rocha scored off of a St. John’s deflection to win the match.

Men’s soccer succeeded defensively as expected. The team leads the conference in goals against average (GAA) with a 0.57 mark, and veteran goalkeeper Luka Gavran’s nine shutouts are the most in all of Division One soccer.

The unexpected happened on Saturday, Oct. 23 versus Marquette. The Men’s Soccer team broke out offensively, scoring four goals in a rout of the Golden Eagles. It was a dominant effort from start to finish, and was the first home victory versus Marquette since 2005. St. John’s outshot Marquette by 18 to five, and each of their four goals were scored by different players.

It was just what they needed to prove they are contenders, and the national rankings agree. TopDrawerSoccer (TDS) has the Johnnies ranked No. 24 in the nation, inside the Top 25 for the first time this season. The NCAA’s rating percentage index (RPI) has the Red Storm at No. 26 and their United Soccer Coaches poll sees the Johnnies receiving votes.

The Men’s team has just two regular season games remaining, and need to capitalize on those games to earn the best possible seed in the Big East playoff tournament. They now stand at third in the conference, behind Georgetown and Providence, and are three points behind second-place.

The Women’s Soccer team broke their three-game losing streak with a pair of 1-0 shutouts in the metropolitan area last week. The Red Storm goalkeeper Naya Lipkens played hero yet again, saving eight shots on goal, cementing a career-high 64 saves through the week.

The Johnnies bent, but did not break during their senior day match with Providence on Sunday, Oct. 17th. Providence had nine shots to St. John’s five, but one of those five shots was a penalty kick that Zsani Kajan sent into the net for the Red Storm. Lipkens was forced to make five saves to fend off the offensive movement from the Friars, and secured her seventh shutout of the season in the 1-0 victory.

The Women’s team followed the solid performance with a dominant one on Thursday, Oct. 21 at Seton Hall. The Red Storm had 17 shots throughout the match, including what would be the game winning goal by Maia Cabrera in the 43rd minute. The team persevered as the Pirates saved five shots on goal in an attempt to contain the Johnnies.

Women’s Soccer now stands at 9-5-2 (5-3-1 Big East) in fourth place in the conference, behind Xavier, Georgetown and Butler.

In their only match of the week, Women’s Volleyball swept Xavier on Saturday, Oct. 23. The match was part of the University’s homecoming weekend festivities, and featured volleyball alumni in attendance, per an athletics release.

Rachele Rastelli had 16 kills in the match to lead the Red Storm, including two to end the first set by a score of 28-26. It was the closest set of the match, and the Johnnies closed out the final two sets by a score of 25-20 in each one.

Rastelli’s efforts have put her in rarefied air in both program history and conference history. She earned her third Big East Offensive Player of the Week award of the season and now ranks sixth all-time in program history with 1,308 career kills.

For the first time in conference play, St. John’s soccer and volleyball have concurrently found offensive and defensive success. The Men’s Soccer team is now gaining national recognition for their success, and the Women’s Soccer team has clinched a spot in the Big East playoff tournament. Volleyball now looks to get back to .500 this week and Rastelli hopes to cement herself as one of the greatest players in program history.