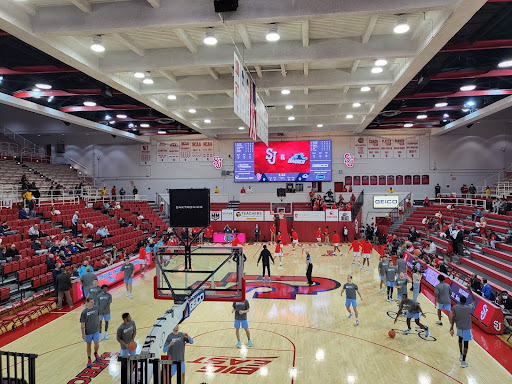 For St. John’s basketball, junior Julian Champagnie and sophomore Posh Alexander are known contributors. In their Wednesday, Oct. 27 exhibition game vs. Baruch, the game plan was to get everyone involved and figure out who to use around them.

It was a resounding success, albeit against a Division Three program, as the Johnnies obliterated Baruch to the tune of 107-43. Head coach Mike Anderson went as far as to say that the experience was crucial in the team’s development with only three returning players on the roster. “It was good to get out and play against somebody other than ourselves,” Anderson said in a postgame press conference. “We did what we were supposed to do.”

Anderson used the game to explore the depth of the roster, using 13 different players throughout. It was clear at the start that the team is in the process of growing into their own as a unit. The Red Storm committed 18 turnovers and, at times, players didn’t know where the ball was going on quick passes. “We came out with a little nerves, [we] were sloppy with the ball,” Anderson said. “But I felt our defense was intense, and we got better as the game went on.”

Anderson’s assessment was correct. Five players reached double figures in scoring for St. John’s and 12 players scored points over the course of the night. Even as the team spread the ball around, the stars and playmakers shone through in their victory.

Sophomore point guard Alexander pushed the pace of the game faster as the game went on, facilitating fast breaks on the offensive side of the ball. St. John’s dominated the speed of the game as is customary under Anderson, scoring 42 fast break points. Defensively, Aaron Wheeler and Montez Mathis routinely led the full court pressure resulting in a combined six steals between the two. “We got them out of their rhythm,” said Anderson.

Alexander’s role tonight was as a facilitator, creating offensive ball movement and scoring opportunities with 13 assists. Anderson’s vision for Alexander moving forward is to lead the team on the court as he does on the sidelines, he revealed at Big East Media Day. Alexander “took a big step tonight distributing the basketball,” Anderson said.

Late in the first half, Champagnie took over the scoring and paced all scorers for most of the game, finishing with 19. Champagnie, who has been a full participant at practice for less than a week, pulled down 13 rebounds. “That’s how we stop opponents, that’s how we end possessions and get going,” Champagnie said. For a team that struggled with rebounding last season—St. John’s was last in the Big East in rebounding margin last year, allowing opponents to grab 5.6 more rebounds on average—the tenacious team effort of 56 rebounds is a sight for sore eyes.

After returning from the locker room, transfer Joel Soriano made his presence felt under the basket with slams, rebounds and blocks. Soriano is the best big man St. John’s has had in recent years, but had to adjust to Anderson’s system by losing weight. “There’s some things he’s got to get better at, and he started from day one,” Anderson said at Big East Media Day. “He came in [to the program] at about 285 [pounds], he’s at 260 [pounds] right now.” It worked in the exhibition, as Soriano was the second leading scorer with 17 points.

Freshmen Rafael Pinzon and O’mar Stanley held their own on the court with ten and eight points, respectively. Pinzon especially had excellent looks from the three point line and effortlessly pivoted to layups when the shot wasn’t there. The only other freshman on the roster, forward Drissa Traore, is a redshirt candidate, according to Anderson.

The team’s success in some ways makes it harder for Anderson, who is trying to find answers to the questions of who he can count on and who can make an impact. “It’s going to get real competitive,” Anderson said. “Some guys are more ready to play than others.”

Anderson will get another look at his team during a closed-door scrimmage on Sunday. The official start of the 2021-22 season is the home opener on Nov. 9 vs. Mississippi Valley State at Carnesecca Arena.