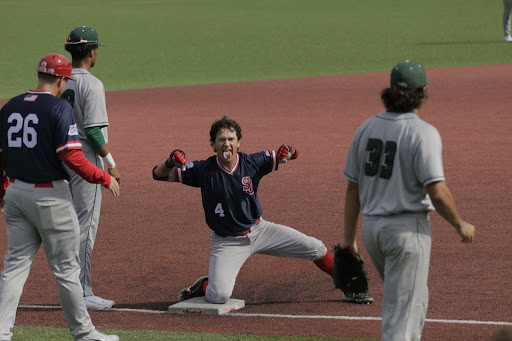 After last season with a record of 19 wins and 21 losses, fall baseball is back and working to become a better team than last season. At the end of last season, around 18 players either graduated or entered into the transfer portal. This amount of players leaving a Division one team is very uncommon. This year, six players transferred in–– one from a Division one team and five from JuCo schools–– and 10 freshmen were added to the Johnnies roster.

Returning second baseman, Chris Conniff, told The Torch in an interview about the different dynamic of the team this season compared to last season.

“This year with a lot of new guys coming in, I believe that our dynamic is a lot better than last year,” said Conniff. “This year we are already more team based.”

Outfielder Jayson Kramer has just transferred from junior college Patrick Henry in Virginia. At Patrick Henry, Kramer appeared in 23 games with a batting average of .254 and 63 at bats.

Kramer says that coming to St. John’s was an opportunity to improve both on and off the field. As a newcomer on the team, trying to fit into a group that have played together can be intimidating. Despite this, Kramer said that “everyone gets along really well and everyday we seem to get closer and closer.”

The fall ball season is a time for all players to get out on the field and for coaches to finalize the starting nine for spring. The Johnnies played Boston College on Oct. 9 and Wagner College on Oct. 16 in double header scrimmage games.When asked how this season could turn out to be Conniff said, “ Gotta a lot of guys who wanna come in and play, especially the new guys. They are coming in to compete. We are going to be coming into the Big East tournament hopefully and competing.”

There will be only intrasquad games to be played the rest of the semester. These intrasquad games are when the team is split into two teams and play each other. Fans are allowed to come watch these games after not being able to for most of the season due to Covid-19 restrictions. Towards the end of the season though, fans could come to games if added to a players list to come watch certain games.

The full schedule for the season will come out from the Big East closer to the end of this semester. Regular season play will begin next semester in January 2022.