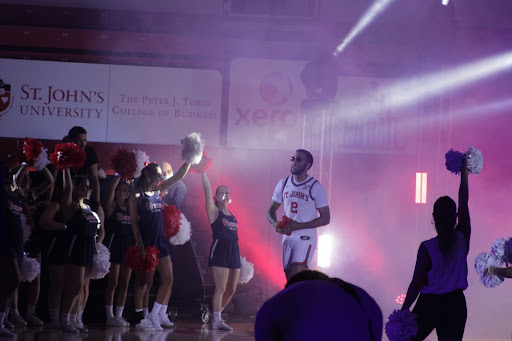 The play of returning player Julian Champagnie will be a focal point of the Johnnies’ quest to earn Big East and national glory, even though the introduction of new faces to the Men’s Basketball Program has dominated much of the preseason discussion. After seeing vast improvements last season, Red Storm fans have a lot to be excited about going into the 2021-22 season.

Champagnie has always shown potential to be a dynamic force. In his first season in a St. John’s uniform, he started 26 out of 32 games while averaging about ten points per game on 44 percent shooting and 6.5 rebounds per game. His scoring and rebounding numbers were good for third and second, respectively, among Big East first-years en route to Champagnie’s selection to the 2020 All-Big East Freshman Team.

Without fans in the arena, Champagnie embarked on his sophomore journey in Queens. His growth and development over the summer was on full display during the 2020-21 season as his role under Men’s Basketball coach Mike Anderson expanded. In the clear lead role for the Red Storm, he averaged 19.8 points and 7.4 boards in 33 minutes per game, all of which were team highs. Champagnie’s scoring output was enough to take the Big East scoring crown, making him just the fourth Johnnie to do so.

His importance to the success of St. John’s Men’s Basketball during the 2020-21 season cannot be understated. Among Big East players, Champagnie ranked 6th in win shares, which is a Sports Reference statistic that measures the impact of a player’s offensive and defensive statistics on winning. He was the only member of the Red Storm in the top 25 of the Big East in this category. Additionally, his three-point and free throw percentages were both above the team average for the season. This demonstrates that while Champagnie’s point totals are typically viewed as an individual measure of excellence, its impact on the success of St. John’s is equally crucial.

Champagnie accomplished all of this as the team achieved a 10-9 Big East record, the program’s first winning season in conference play since the 2014-15 season. When the season ended with a first round exit in the Big East Tournament, the team declined an opportunity to play in the National Invitation Tournament. It became clear that there was unfinished business in Champagnie’s legacy at St. John’s.

Champagnie spent much of this past spring testing the NBA Draft waters before returning to St. John’s for the upcoming 2021-22 season. Carrying out this common process not only allowed Champagnie to put himself on the radars of scouts league wide, but also to learn what he can improve on before entering professional basketball.

“The pace of the game in the NBA is a lot faster than the game of college basketball,” said Champagnie. “The way we play is fast, so that’s going to help me push forward and push against the pack.” While it is hard to imagine how the reigning Big East scoring champion could be even better for the Johnnies, the pace of play will surely be on full display come game time.

The program faced extensive roster turnover in the offseason, losing nine scholarship players. Champagnie remains as a key leader for the Red Storm this season. Even with so many new faces, the Johnnies’ leading scorer understands how we can help players who are new to Queens. “I try to spread my knowledge with everybody,” Champagnie said. “I kind of just give them pointers here and there to get to their spots [and] have energy.”

Champagnie let out a laugh, and continued, “You know, on how to deal with [Coach Anderson].” Jokes aside, the laid back swingman knows his responsibilities as a veteran on this squad, which will allow him to focus on expanding his game. Ultimately, Champagnie is focused on winning, and the newcomers can assist him in both.

Nationwide, the expectations could not be higher for the 6’8” junior. He has already collected placements on the National Association of Basketball Coaches (NABC) Player of the Year Preseason Watch List, Athlon Sports’ Preseason All-America Third Team and the Naismith Memorial Basketball Hall of Fame’s Julius Erving Award Watch List, the prestigious award given to college basketball’s top small forward. In his home conference, Champagnie was a unanimous Preseason All-Big East First Team selection.

These projections might be the last thing on Champagnie’s mind. “Especially being from New York, I want to win, and do it at home,” said Champagnie. “That’s a big thing for me.”

That’s music to the ears of the Johnnie faithful, who cannot wait to get back inside both Carnesecca Arena and Madison Square Garden. As we look to see the talk translate to the hardwood, keep an eye on Champagnie and his crew as they continue their ascent to the top of the Big East.