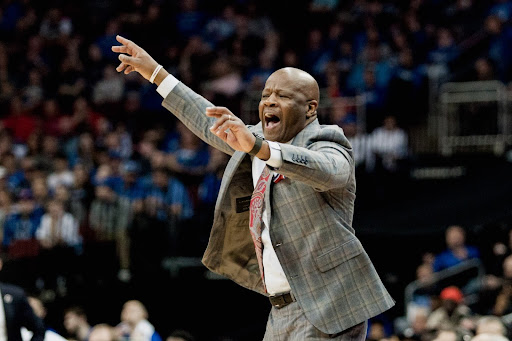 For years now, the slogan “We Are New York’s Team” has represented the St. John’s Men’s Basketball program. When players look down the court, they see those words embossed in the floorboards. When fans attend games at Madison Square Garden and Carnesecca Arena, the program gives away shirts donning the phrase. For many fans, it represents the city’s passion for the team and it’s stylized in a font as bold as the city itself.

Now, the team that head coach Mike Anderson has built fully embodies the city it plays in. “Last year, I got told, ‘You know what, that looks like a New York team,’” said Anderson. “I took a lot of pride in that.”

It’s partly because of Anderson, whose quick and physical style of play has characterized the Johnnies since he took over in 2019. “Guys are willing to come in and help us continue to elevate the program,” Anderson said. Even when the players on the roster don’t fit the traditional build of a quick basketball player, they adapt, because that’s the expectation now in Queens. “Did [the transfers] buy into it?” Anderson asked rhetorically. “They’ve got no choice.”

Coincidentally, it’s Anderson’s recruiting success with city kids that has his team playing this way. Sophomores Posh Alexander and Dylan Addae-Wusu, who went to high school at Our Savior Lutheran in the Bronx together, are leading the charge. It’s led to three straight winning seasons under Anderson, including a winning record in Big East conference play last year.

It tells us a lot about the team’s heart, especially with Alexander running the point in the Big East Tournament with a broken thumb last season. “It tells you about his heart, he wanted to be out there so bad,” Anderson said. The team has to be more level-headed in a tough conference like the Big East to reach the next frontier, though. “The young guys get emotional out there,” Anderson continued.

Anderson learned this style of play while working as an assistant coach at Arkansas early in his coaching career, but it fits New York City well. “The thing that I can appreciate is that there is a love for basketball here,” Anderson said. “There’s a lot of love and a lot of respect for teams that go out and leave it all on the floor.”

As the Men’s Basketball program gains respect – with the Johnnies picked to finish fourth in the Big East according to the coaches’ poll – players will have to give their all to take the next step. For Anderson, that next step is the NCAA tournament. “We know where we want to be at the end of the season,” said Anderson. “If you’re here, and you’re not thinking about winning a national championship, you’re in the wrong business.”

Anderson’s guiding a new-look roster, with nine new scholarship players and just three scholarship players returning. It is expected for there to be ups and downs in this particular season because a team that plays Anderson’s way needs to know precisely where each player will  be in order to succeed. “There’s a learning curve,” Anderson noted. “We’ve tried to expedite it through summer workouts, our practice right now and even as we get into the non conference schedule.”

When the Big East schedule opens on Dec. 20 across the river at Seton Hall, Anderson’s city kids will be ready and eager to play. It won’t just be New York natives Alexander and Julian Champagnie, either. It’ll be the entire team because that is how Anderson runs his program. “Our team will not be a one, two man team,” Anderson said. “We [have] a real team that plays with a lot of depth.”

Most importantly, the accountability in the program stimulates their desire for success both in the short term and the long term. “We expect a lot out of ourselves,” Anderson said. “You can see we’re excited about this basketball team, becoming the best version of ourselves.” Under Anderson’s leadership and the culture he’s brought to Queens, “New York’s Team” is ready to take on the Big East.