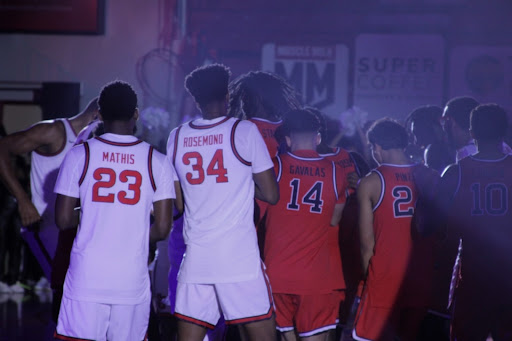 Die-hard fans of the Red Storm are finally returning to Carnesecca Arena this week to watch the Men’s Basketball Team, and they may be in for a shock – especially if they were well-versed with last year’s roster. The bench dons an entirely different set of faces than previous years, as over  half the team has joined the Red Storm through the transfer portal. Only a handful of names will sound familiar to fans, with six transfers on the team. Three graduate students, Stef Smith, Tareq Coburn and Aaron Wheeler, have joined the team through the transfer portal, as well as senior Montez Mathis and juniors Esahia Nyiwe and Joel Soriano. The team will certainly have versatility and distinctiveness as these players make their debut for St. John’s.

Each graduate student brings years of previous collegiate experience to the team. Aaron Wheeler played for Purdue University for his undergraduate career, appearing in all 28 games his senior year. The New Hampshire native averaged 3.9 points, 4.4 rebounds and 1.0 assists per game while drastically improving throughout the year. In his last six games at Purdue, he averaged 6.2 points and 4.8 rebounds, shooting .550 from the field.

Wheeler feels his addition will benefit the team due to his ability to be a utility player.

“[I will] bring versatility,” he said at St. John’s Media Day. “I think I can do a number of things and whatever I am asked to do. I can stretch the floor, guard multiple positions, get out in transition. [I will fit best by] being able to do different things on the floor and be consistent.”

Stef Smith joins St. John’s after a successful four-year career at Vermont University. After being part of the America East All-Conference Teams for his last two years, he graduated from Vermont ranked 24th on the school’s all-time scoring list. Dangerous from afar, he ranked eighth all-time in three-pointers made as well (198).

Whereas Wheeler took time to get warmed up his senior year, Smith was on from the jump with four straight double-figure outings. Now, he is excited to be part of the energy of his new team.

“Everyone wants to get better [and] everyone wants to win,” Smith said. “I think there’s really just a love of the game for basketball. A lot of times when there’s a lot of transfers coming in, it’s pretty difficult to build team chemistry. But I think it’s been pretty smooth, it’s like a brotherhood.”

Queens native Tareq Coburn spent his three year tenure atHofstra University on Long Island, after spending his freshman year at St. Bonaventure. His addition to Hofstra helped bring the team to the 2020 Colonial Athletic Association championship. Joining Smith, he is a deadly long range weapon, shooting 40.3 percent from beyond the arc in his 90 games with the Pride.

Coburn’s junior season was the uncovering of his identity as a basketball player. “I’m a shooter,” he told The Torch.  Successful on and off the court, he is a two-time CAA Scholar Athlete of the Year.

With three new undergraduate upperclassmen joining the team in the transfer portal, it is clear that Head Coach Mike Anderson is changing diversity and depth. Senior Montez Mathis has made the move to Queens from Rutgers University, another Big East rival. In three seasons, he brought a deadly presence as a shooting guard for the Scarlet Knights, while reportedly having a fierce work ethic and a tenacious attitude. His toughness is shown in his defensive prowess, with a 2.6 percent steal rate against opposing ball handlers and 71 steals in his three year career.

Junior Joel Soriano is the big man that the team needs to balance out its long range shooting. A 6’ 11” center, he averaged a near double-double in his final year at Fordham with 10.4 points and 9.2 rebounds per game. His presence will bring the team the rebounder that it needs to compete in close games, where second chance shots are the difference between a win or a loss.

What is most unique about this team and coaching style, he says, is its pace.

“It’s a different type of speed, for sure,” he said. “We play really fast. When I first got here, it was a big step forward [for me]. I still have some things to work on, but it definitely has been a big adjustment. At the beginning it was tough, but it’s [the offense] like second nature to me now. It was a flip of the switch.”

As many Johnnies know, Coach Anderson’s teaching style, dubbed “40 Minutes of Hell,” is not going to allow anything but speed. With full court defense and high intensity being two of its main characteristics, slow is not an option.

Nebraska native Esahia Nyiwe’s journey to St. John’s is certainly unique. After high school, he spent his freshman year at Iowa Western Community College, then transferred to Clarendon College. There, he developed his game, averaging 8.1 points and 8.0 rebounds per game with a team that was the three seed in the NJCAA Division I Tournament. He spent his summer at Texas Tech for purely academics, before suiting up once again for St. John’s. The 6’ 10” junior brings another deep front-court threat for the Red Storm.

Past returning stars Posh Alexander and Julian Champagnie, much of St. John’s Men’s Basketball is unknown territory. How they will perform in the upcoming weeks is a difficult prediction. With their long range threats, collegiate maturity and optimistic players, the team feels prepared and ready to tackle the Big East and beyond. Fans will have to simply watch and hope that the talent from afar will reap rewards in Queens.

“But as I told [Julian Champagnie] and told our team: Our team will not be a one, two man team,” Anderson said. “It won’t be just Julian and Posh. It’s gotta be Stef, it’s gotta be Aaron Wheeler, it’s gotta be Joel. We got a real team that plays with a lot of depth.”