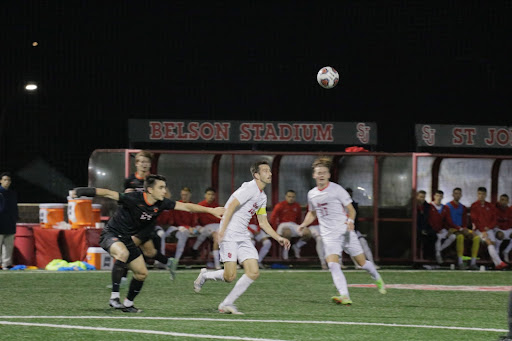 St. John’s sent the red-hot Princeton Tigers packing Thursday night in a physical 1-0 victory in the opening round of the NCAA College Cup backed by Luka Gavran’s ten saves.

Princeton, who entered the match on an eight-game win streak, lost to the Johnnies earlier this year. Despite the victory, the Tigers had a great showing and only got better in Ivy League play. “Seeing Princeton again was a little bit worrisome,” coach David Masur said in a postgame media conference. “They kind of got the better of us down there [in Princeton.]”

The game was physical and chippy from the start, as the senior midfielder Einar Lye was sportsslammed by Princeton’s Issa Mundashiru in just the ninth minute of the match. Both teams traded fouls throughout the playoff match, with each finishing with 12 on the night.

Princeton’s Daniel Diaz Bonilla was an offensive threat early on, breaking free on the right side of the pitch on the Tigers’ attack. Diaz Bonilla couldn’t capitalize on those outside chances, sending balls out of play and right into the hands of Gavran.

Gavran made 12 total saves throughout the match enroute to his tenth shutout of the season, which puts him alone at the top of the NCAA ranks. His ability to stop balls up the middle was the difference in the match with both teams getting good shots on goal from that zone.

Princeton’s goalkeeper Jack Roberts paced with Gavran for most of the first half until the 43rd minute, when Brandon Knapp sent his fifth goal of the season into the bottom right corner of the net on a half-turn kick. “I was aware of where the goal was, and I was also aware of where the two defenders were,” Knapp, the team captain, said of his go-ahead goal. “Right away I thought, ‘turn and shoot,’ [I] found the loose ball and found the bottom corner [of the goal.]”

Knapp was only in that position because of his precision in a finishing drill in practice, Masur said. The team had previously been using Knapp as a defenseman, but due to their recent scoring woes moved him up to forward and midfielder during the match versus Princeton. Masur was particularly impressed with Knapp’s play at midfield, and it’s a position we might see him at as the tournament continues.

The St. John’s team has played close with every opponent they’ve faced this season – all five of their losses came by just one goal – but they haven’t spent many minutes with the lead on their path to the NCAA College Cup. On Thursday night, the Men’s Soccer team had to play ahead for 47 minutes to advance. “When we’ve got a goal, we want to try to get more,” coach Masur said after his 22nd NCAA tournament appearance. “One goal is never enough, even though we have some shutouts.”

Despite solid chances and effective ball movement in the second half, the extra goal Masur wanted didn’t come for the Johnnies. With Gavran’s dominance in goal this season, Knapp’s first half goal was all the Red Storm would need. Gavran said “maturing a bit over the years, mentally, in training and in games” has resulted in his extreme focus. “[We have] a great back line,” Gavran notes. “We’ve built a lot of chemistry throughout the season so I think they’ve done a great part of my clean sheets and my success.”

The play of the game just might have been a defensive takedown of a Tiger who broke away in the 59th minute. No whistle was blown on the play and Gavran was able to clear it downfield to neutralize the threat.

A notable absence from the group was Tani Oluwaseyi, the senior forward who against all odds returned from what was expected to be season-ending knee surgery in St. John’s final two games. The team announced that due to Oluwaseyi’s knee injury he was unavailable in the first round of the NCAA College Cup.

The Johnnies now have just two days to prepare to face No. 1 Oregon St. on the road in the second round of the NCAA College Cup on Sunday, Nov. 21 at 9 p.m. “It’s exciting,” Knapp said. “We got to stay focused over the next few days and hopefully [we’ll get] a good result.”