St. John’s Falls to Kansas, 95-75, in First Ever Basketball Game at UBS Arena

The Johnnies found a rhythm in the second half, but it was too little, too late 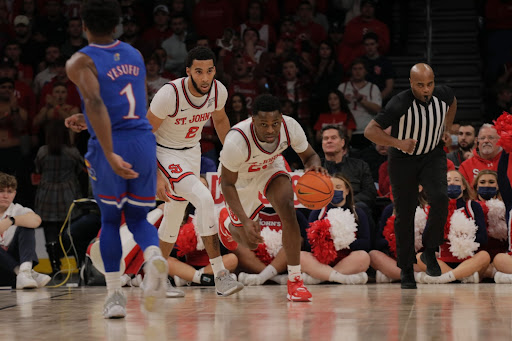 St. John’s fell to No. 8 Kansas by a score of 95-75 on Friday, Dec. 3 as the Johnnies quickly found themselves in a ten-point hole they would never fully overcome.

The fan energy in Elmont for St. John’s vs. Kansas, the first ever basketball game at the newly-opened hockey venue, was unlike anything we’ve seen at Carnesecca Arena. In fact, the lower bowl student section sold out earlier in the week of the game, prompting UBS Arena to open a special upper bowl section for students.

The energy didn’t translate into results – at least not immediately. The building was rocking in support of the Johnnies, but they found themselves in an early 13-2 deficit. “I thought the nerves were there,” St. John’s head coach Mike Anderson said in a post game media conference.

That’s when Anderson started making adjustments. Starters Joel Soriano and Stef Smith were removed just four minutes into the game after causing turnovers early. St. John’s showed signs of life from that point on and would pace the Jayhawks throughout the first half, where they were stuck ten points behind.

The bench and the city kids – Posh Alexander and Dylan Addae-Wusu – started creating offense. The Johnnies are at their best when they’re driving to the basket and forcing turnovers in transition defense. “It starts with our defense,” Anderson said. “I thought Dylan [Addae-Wusu] was the catalyst in that.”

But every time the Red Storm clawed back – they got within five points late in the first half – Kansas answered. It all started with Kansas’ shooting prowess, led by Ochai Agbaji, who finished the half 4-7 from three-point range and 6-11 from the field. After the St. John’s run, Agbaji sank a pair of three-pointers to extend the Kansas lead to 12 points.

The Kansas team walked off of the court to a cascade of boos from the enormous St. John’s student section, but held a 13 point advantage over the Johnnies. But when the Red Storm walked back out for the second half, it was as if the energy level from the fans finally translated to the court.

Alexander opened the half with a made three-point basket and Montez Mathis quickly followed with a steal and the layup in transition. In less than a minute of second half play, the Johnnies had cut their deficit to eight and looked more poised on offense than in the first half.

Then Julian Champagnie, who was a non-factor in the first half, caught fire for the Red Storm. Champagnie unleashed a tear of five made three-point baskets. Everything got better as Champagnie found his stroke for the first time in three games, from rebounding to second chance points to defensive pressure. “I was confident in my work,” said Champagnie about the time he spent between games, the longest in-season break the team has had so far.

But then Anderson pulled the scorching Champagnie from the game with just over ten minutes to play and the life was sucked from the St. John’s team. It would be only a minute before Anderson was forced to call a timeout, but when Champagnie re-entered the game, the ground had been lost and it was an eight-point game.

Anderson said that Champagnie was tired when asked about the substitution, but added he didn’t think it was a turning point of the game.

The Red Storm couldn’t find that rhythm after the substitutions, and allowed Kansas to score 11 points unanswered following the move. It put a game that was within one possession firmly out of reach.

The downward spiral compounded with late-game technical fouls assessed to Anderson and Alexander after an animated argument about a possible goaltending no-call. Christian Braun made all four of the resulting free throws to put Kansas ahead by 20 points, a lead they would not relinquish in the final four minutes.

There were some positive signs – the Red Storm essentially paced one of the best teams in the country for 25 minutes and Champagnie shot well from distance – but eventually they’ll need to put together a solid 40 minutes of good basketball to be successful in the Big East.

The Red Storm return to action on Sunday, Dec. 5 versus Fordham at Carnesecca Arena, but won’t get the chance for a signature win until Big East play begins on Monday, Dec. 20 at the Prudential Center.