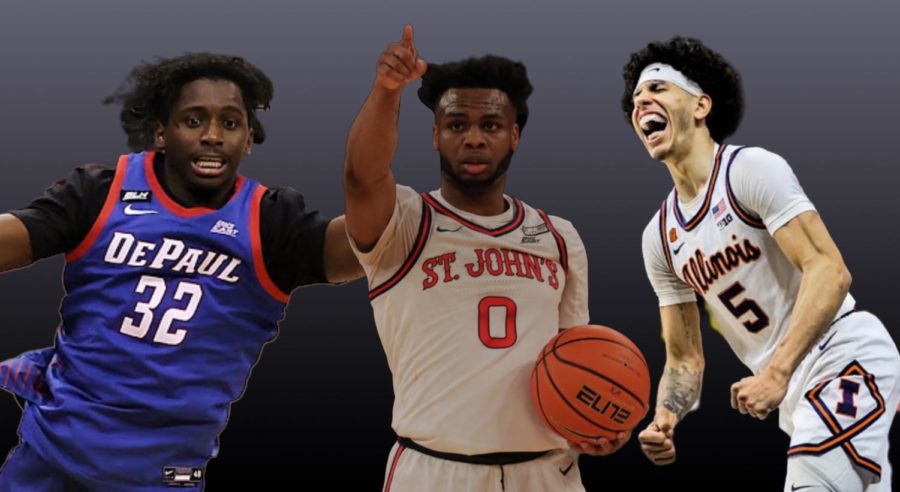 David Jones, a standout at DePaul University this past season, verbally committed to St. John’s late Sunday night, according to the New York Post. He joins Andre Curbelo on a retooled Johnnies squad that has the potential to be a force within the Big East next season. The Red Storm’s 2022-23 roster continues to take shape, as head coach Mike Anderson and his staff have secured yet another top talent via the transfer portal.
Jones’ Journey to Queens
A native of the Dominican Republic, Jones played his high school ball in West Virginia en route to becoming his class’ top recruit from the state. Nationally, the 6-foot-6 forward was widely classified as a top-150 recruit before signing with DePaul in November 2020.

His freshman year, he appeared in just nine games — including one start — averaging just over 14 minutes per game. Despite this limited role, Jones averaged five points per game under head coach Dave Leitao, who was fired immediately following the 2020-21 season.

Under a new coach in Tony Stubblefield, Jones truly broke out during the 2021-22 campaign. He nearly tripled his scoring output, averaging 14.5 points in 30 minutes per game while setting career highs across the board. The forward even recorded a triple-double against Georgetown on February 9, one of the sport’s rarest and most impressive feats — especially at the collegiate level.

Even with All Big-East talent Javon Freeman-Liberty taking center stage for the Blue Demons, Jones stood out as one of the conference’s most effective players. He had the ninth-best scoring average in the Big East, but only Connecticut’s Adama Sanogo shot a higher field goal percentage while averaging more points. This is a testament to Jones’ efficiency, which ranked sixth in the conference, according to Basketball Reference.

Jones provides much more than scoring to his team, however. Despite his size, he was tenth in rebounds-per-game among Big East players. He was also among the conference leaders in steals per game, something Red Storm fans would love to see replicated in Queens.

It was reported that Jones entered the transfer portal on April 19. He visited campus during this past weekend, prior to the news of his decision spreading across the internet Sunday night. Jones had posted photos from both Madison Square Garden and the Queens campus to his Instagram story over the past few days, driving speculation to a peak before the news broke.
How Jones Fits in with the Johnnies
The new-look roster is just about complete, as they have just one scholarship slot remaining to complete the roster. With AJ Storr and Kolby King also entering the fray for the Johnnies, there will be a fairly new look to Coach Anderson’s “40 Minutes of Hell” next season.

As for Jones specifically, the departure of Julian Champagnie and Aaron Wheeler create an interesting opportunity for the forward. There are minutes to be had — and earned — in the starting lineup and the DePaul transfer brings a unique skillset to the team.

Jones has demonstrated a great sense of how and when to move without the ball, creating additional opportunities for himself. Meanwhile, when the ball is in his hands, he can create open looks for teammates while also knocking down shots himself.

The newest Red Storm forward, beyond just his fantastic basketball instincts, is very technically sound. Jones’ pump fake is a masterful one l, something that enables him to either draw a foul or get to the basket. This, along with great footwork around the rim, will solidify Jones as one of the Red Storm’s primary scoring options next year.

Jones is no stranger to St. John’s and its current roster. While he played against the Johnnies three times last season, he also has ties to starting center Joel Soriano. Jones and Soriano have played together for the Dominican Republic’s national basketball team, creating a relationship that played a role in Jones coming to Queens. Hopefully, this chemistry translates to the hardwood of Carnesecca Arena during the 2022-23 campaign.

Losing Champagnie and Wheeler created a gaping hole in the St. John’s roster, but the offseason has proven to be an interesting one thus far for this team. Jones may not be an exact replica of either of these previous talents, but his skillset is something that will quickly set him apart from the rest of the roster. Only time will tell, but the Johnnies seem to have positioned themselves well for a strong year ahead.