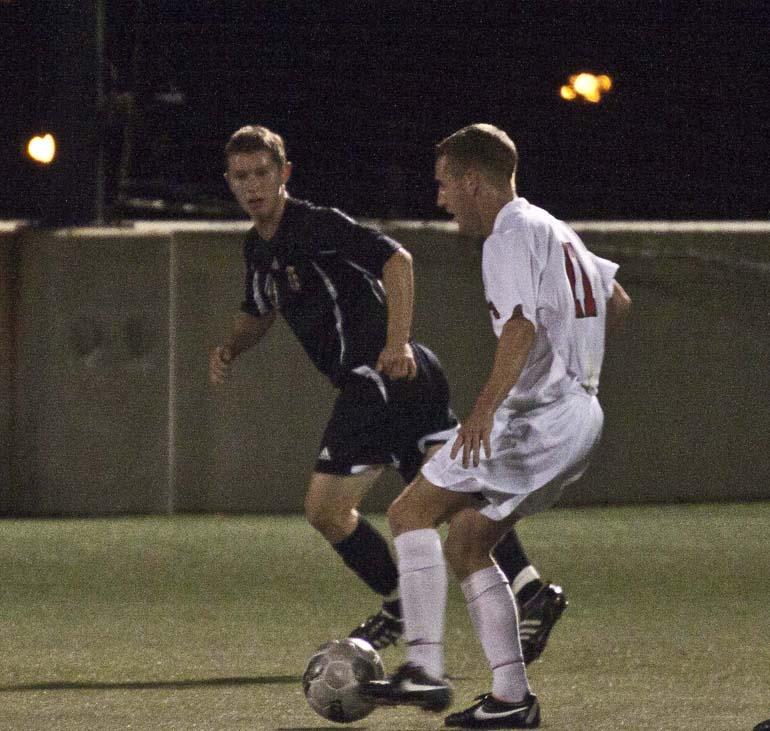 The then-No. 21/21 St. John’s men’s soccer team won the Big East Tournament championship with a 1-0 overtime win against No. 4/3 Connecticut on Nov. 14 at Red Bull Arena in Harrison, N.J.

“I’m really proud of the guys,” said St. John’s head coach Dave Masur. “As we prepared for UConn we knew they were a good team, they’ve had an unbelievable season, they have a great tradition, and they are always a very, very tough opponent.”

The Red Storm (14-6-2) clinched the title through a golden goal from junior midfielder Jack Bennett in the 96th minute in the first period of overtime.  Bennett robbed Big East Defender of the Year Andrew Jean-Baptiste 35 yards out from UConn’s
goal. He proceeded to race into the Huskies’ 18-yard box before slotting past Big East Goalkeeper of the Year, Andre Blake.

“I saw [Jean-Baptiste] take a quite heavy touch and I don’t think he was anticipating me to close him down so quick, so I just took my chance and I won the ball,” said Bennett. “I was heading for that goal and thankfully I scored.”

The London native immediately rushed to the corner flag in celebration with his teammates close behind. The golden goal gave the Johnnies a record ninth Big East Tournament title.

It was Bennett’s fifth game-winning goal this season. He leads the team in both goals and assists, with six of each.

“[Bennett] is a dynamic player, he can take people on, he connects his passes, he has a very sharp first touch, has a little bit of power off his foot as well, which is nice,” said Masur. “He is very competitive for a little bit under-framed type of gentleman, he is good in the air, has a good engine, and he’s got a great attitude. He always wants to do more for the team and he always accepts one thousand percent accountability to try to make himself better, and good things happen to people that have that type of attitude.”

The first half was eventful and the fans at Red Bull Arena saw the first goal-scoring opportunity in the first minute as Bennett’s glancing header went wide of the UConn (17-3-2) goal.

UConn had its first chance to open the scoring in the 19th minute when forward Mamadou Doudou Diouf failed to convert a left-footed volley from eight yards out.

The Huskies had a number of other chances throughout the first half, especially after St. John’s junior defender Bjorn de Hoop and senior midfielder Pablo Battuto Punyed went down with injuries, but failed to capitalize on their opportunities.

“We had a few chances and we couldn’t finish,” said Connecticut forward Tony Cascio. “That’s how soccer is sometimes.”

UConn continued to control possession in the second half, but the Johnnies were the ones who created the best goal-scoring chances. However, it was not until the 96th minute that a goal was finally scored to break the deadlock for good.

It was senior defender and New Jersey native Connor Lade’s second Big East Tournament title, his first coming during his sophomore year in 2009.

“Any title really as a team is sweet,” explained Lade. “But this one is very nice, to go out in my Big East career on this. And I’m just really happy for all the guys and being in Jersey helps a little bit.”