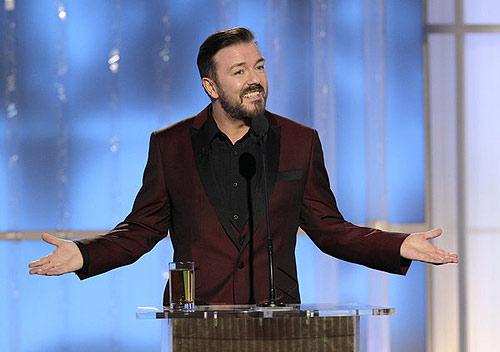 It was a big night in Hollywood, but an even bigger night for foreign films at the 69th annual Golden Globe awards.

The Hollywood Foreign press gave the most awards to the French silent film The Artist, including Best Picture (Musical or Comedy), Best Score, and Best Actor (Comedy or Musical) to its lead French actor, Jean Dujardin.
Meryl Streep won her eighth Globe for Best Actress in a Drama for her role as former British prime minister Margaret Thatcher in The Iron Lady. While Michelle Williams garnered a Best Actress in a comedy or musical for her London set My Week With Marilyn, the same award Marilyn Monroe won 50 years ago.
The Hawaiian based film The Descendants did help America score with Best Picture (Drama) and Best Actor in a drama for George Clooney. Octavia Spencer won Best Supporting Actress in a Movie for her portrayal of a Southern maid in The Help, while Bridesmaids Melissa McCarthy happily cried on.
If foreign films ruled the movie portion of the awards, then cable television shows dominated the television portion. ABC’s Modern Family took home the Globe for best comedy series, the only award to go to a network television show. Showtime struck gold with Homeland, who took home globes for Best TV Series (Drama) and for its lead actress Claire Danes. Matt LeBlanc previously struck out with Friends but scored with Showtime’s Episodes, a first for the actor.
Kelsey Grammer scored for Starz with his win for best drama actor in his cable hit Boss. Laura Dern took a surprise win for
best comedy actress for HBO’s Enlightened. British host Ricky Gervais was tamer than last year, only attacking the likes of Johnny Depp (“Have you seen The Tourist yet?”) and Kim Kardashian (“The Golden Globes are to the Oscars like Kim Kardashian is to Kate Middleton.”)
Following the foreign theme of the night, Antonio Banderas responded in Spanish to Gervais’ comment about not understanding the actor and Sofia Vergara funnily accepted Modern Family’s globe in Spanish. However if anything stole the show, besides Madonna telling Gervais to come do something about it if she was “still a virgin,” it was the male anatomy. During his acceptance speech, Clooney complimented Michael Fassbender’s package in, while Seth Rogen stood next to the beautiful Kate Beckinsale and told the crowd that he was “trying to conceal a massive erection.”
The full list of 2012 Golden Globes Winners (Winners In Bold):
Best Motion Picture – DramaThe Descendants
The Help
Hugo
The Ides Of March
Moneyball
War Horse
Best Performance by an Actress in a Motion Picture – Drama

Best Performance by an Actress In A Television Series – Drama

Best Performance by an Actor In A Television Series – Drama

Best Mini-Series Or Motion Picture Made for Television

Best Performance by an Actress in a Supporting Role in a Series, Mini-Series or Motion Picture Made for Television

Best Performance by an Actor in a Supporting Role in a Series, Mini-Series or Motion Picture Made for Television