Special session at the UN 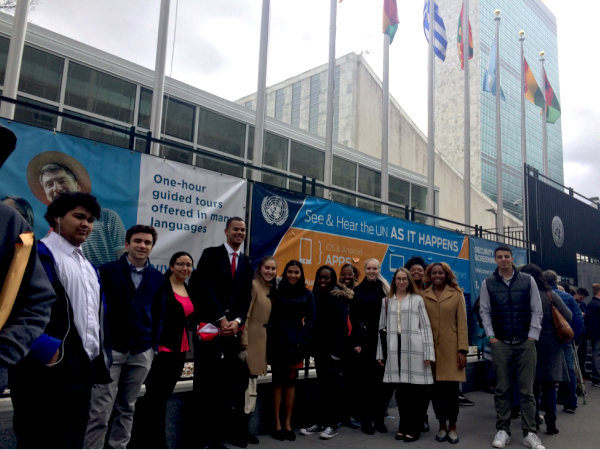 Several St. John’s students had the privilege of visiting the United Nations this past Friday, April 5. French professor Dr. Sara Hanaburgh led the trip for her literature class, titled “Human Rights in Francophone Africa.” The group went on a guided tour around the UN and then received a briefing specially given to St. John’s students by speaker Jean Victor Nkolo from the Office of the Special Adviser of the Secretary-General on Africa.

Nkolo began his lively presentation by asking each student to name a Francophone country and then proceeding to detail the historical context of each. Students listened intently as the Cameroonian national outlined the very real political struggles that are currently taking place in western Africa and emphasized the importance of managing natural resources and women’s rights in order to create peaceful societies.

Nkolo specifically discussed the rare mineral colten that is found in all modern cell phones and can only be mined in the Democratic Republic of Congo, which has caused great instability in the region. The charismatic presenter asked the students to hold up their phones and stated, “You all have a piece of Congo in your hands!” He made clear in his speech that the entire world must be responsible for making sure Congo is stable.

In order to become more stable, Nkolo noted that reproductive health rights should be the first to be secured. In many African villages, women are considered the backbone of society because they are skilled in economics and organization. Without the support of over 50 percent of the population, the women, peace cannot follow.

Our group was very impressed by the charismatic Nkolo’s speech. One student, Da’mere Wilson, a junior psychology major, described his speech as being “more motivational than a usual lecture.” Wilson added, “He framed it in a way that made peace seem more attainable.”

Sophomore Sociology major, Hannah Sweatman said, “I like how Nkolo framed the speech around women’s empowerment and how that is the way for a sustainable future.”

“Peace can only be kept where there is peace to be kept,” Nkolo said. He imparted the students with this final statement to ponder over. The UN is the facilitator in making peace agreements, but it does not create peace. Nkolo made clear that the aid of the African Union and individual states is essential in ensuring that the citizens of all African nations obtain and retain their natural human rights. As citizens of this world, he believes we are all responsible for creating and maintaining peace.