The two teams both played at Belson Stadium in the same night, with the women earning a 1-0 victory over Seton Hall 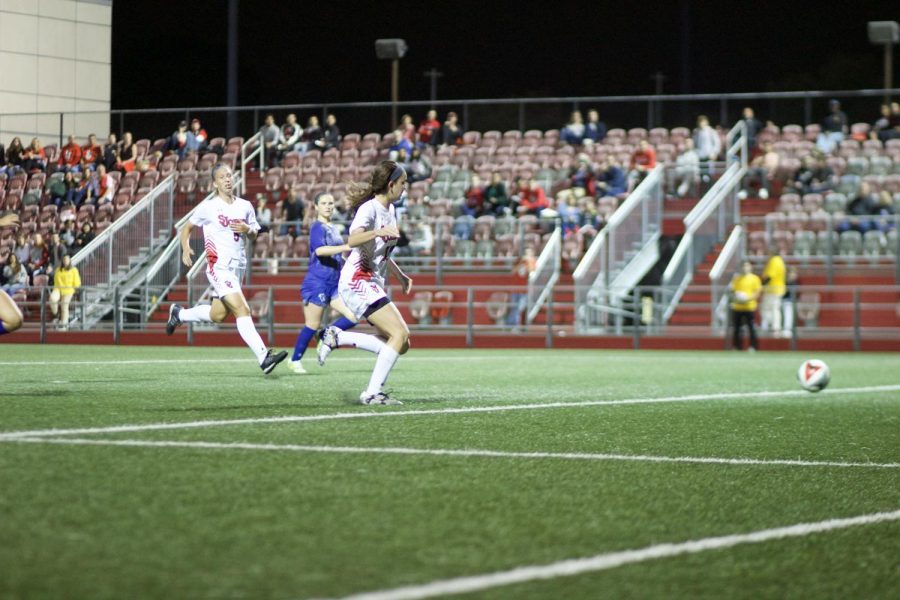 Both the men’s and women’s St. John’s soccer teams played a home doubleheader at Belson Stadium Saturday night. The men hosted Marquette at 5:30 pm and the women faced off against Seton Hall at 8:00 pm.

The men played a highly physical match with Marquette, with both teams collecting three total yellow cards and only three and five shots on goal, respectively.

Both teams put up a gritty fight for the first 90 minutes that resulted in a tie at the end of the first two periods.

St. John’s just barely missed a chip shot that almost grazed the back of the net. Marquette goalkeeper Luis Barraza managed to grab the ball just before it went over the line.

In the 77th minute, Marquette almost nabbed a header goal that just bumped into the crossbar. The overtime period passed and the score remained even, requiring a double overtime period.

In the 103rd minute, St. John’s missed a goal off of a corner kick, with Barraza making a crucial save.

The match came down to the final minute when, with 26 seconds remaining, Marquette’s Matt Alba  knocked in his first goal of the year, a game-winner that cost the Red Storm in a heartbreaker.

After the game, Head Coach, Dr. Dave Masur, applauded his team’s effort. “I thought we played really well after the first 10 minutes, which I thought were a little shaky, but really the next 100 minutes of the game I thought we were fairly solid throughout,” he said. “Marquette has played really well in the Big East. They’ve played everybody tight and they’re a good side.

“It was a little unfortunate we didn’t get a goal tonight and we lost with 26 seconds to go, but it was a really good effort and we have to keep pushing forward. Sometimes soccer can be a bit of a cruel and tough game.”

Following the men’s game, the women took the field against  fellow Big East rival Seton Hall, a team that has yet to capture its first victory of the season.

At halftime of that game, the team honored former St. John’s standout Diana Poulin as 2016 Big East Goalkeeper of the Year. The Red Storm grabbed a 1-0 win on the Pirates, as Christina Bellero knocked in her sixth goal of the season during the 68th minute of play. Despite the one-goal difference in score, the Johnnies dominated throughout. St. John’s attempted 18 shots to Seton Hall’s five.

Goalkeeper Jordan Kamp only had to make one save throughout the whole contest, paying homage to the legendary Poulin with a clean sheet. Just before Bellero made the match’s lone goal, Zsani Kajan and Lucy Whipp fired shots in the previous consecutive minutes that the defense had stopped.

“She’s always been great in front of goal and she has the instinct to be in the right place at the right time and the composure to be able to finish, which is rare,” Head Coach Ian Stone said of Bellero following the match. “She’s very, very consistent at scoring goals and she’s having a great season in that regard.”

Bellero, Kamp and senior defender Jesse Schaefer were all recognized by the conference for their excellent play over the last week.

The men will head to Chicago to face off against DePaul on Oct. 21 while the women will travel to Philadelphia to take on Villanova on Oct. 19.

The women will host their annual Senior Day, honoring the graduating Red Storm players, this Sunday, Oct. 22 at Belson Stadium, the squad’s final home game of the year.

The Big East Tournament begins on Nov. 4 for the men, while the women’s competition kicks off on Oct. 29.