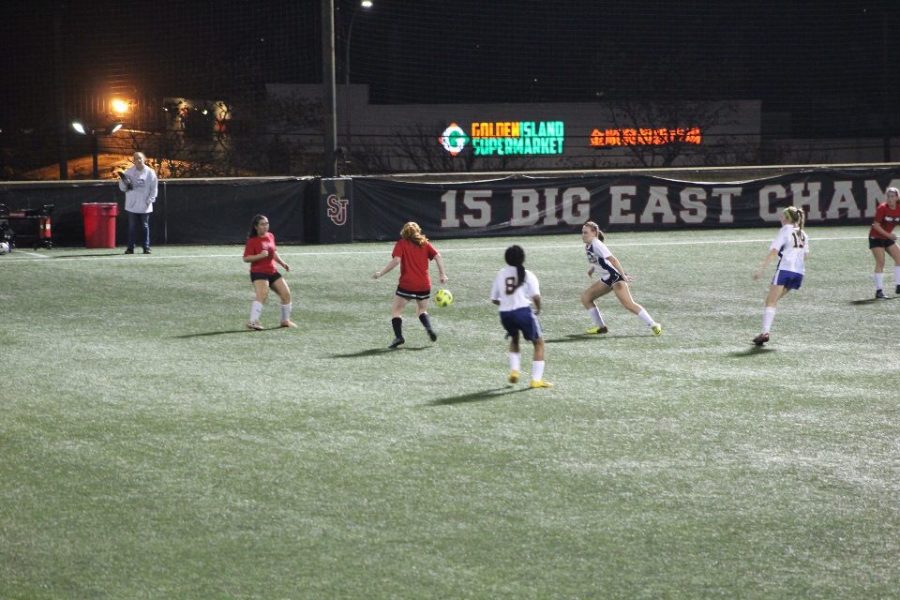 When Maria Sedky Saad arrived at St. John’s as a freshman in 2015, she noticed that there was no club soccer team. Her efforts to create one became frustrating. She even walked around campus and approached strangers to see if they would be interested.

“I always played soccer throughout high school and I saw that St. John’s didn’t have one so that was a bummer,” Saad said.

Students are not allowed to start their own club teams without the approval of Campus Recreation. In order to be approved, Saad needed to prove to them that the team would be successful, not so much in terms of wins and losses, but having girls show up on a consistent basis.

Another obstacle for Saad was field space, since the first priority at Belson Stadium goes to the men’s and women’s soccer teams.

“We put in a proposal for a new club,” she said. “Initially, Denise [Inzirillo] from Campus Rec rejected us because there was no field space. We basically fought her and said ‘no, we’re going to find field space since no one is on Belson and DaSilva all the time’.”

They were able to secure two field times; common hour (1:50-3:15) at Belson on Thursday’s and from 7 to 9 P.M. at DaSilva Field on Sunday nights. Saad realized the team needed coaches, so she reached out to Mark Hanna, a fifth-year pharmacy major, who Saad knew through her major and from participating in other organizations. Hanna played football in high school but had always loved soccer, playing from first grade up until his freshman year of high school.

“I was really excited when Maria reached out to me about coaching,” Hanna said. “It was something I’ve never done before, and I thought it would be a lot of fun, and a great experience.”

While Hanna was excited to be a part of a project that Maria worked so hard to create, he knew that he needed someone with soccer experience to assist him.

“I decided to bring along my friend Kelvin Pensuwan to coach with me since I was confident in his soccer skill and overall knowledge of the game,” he said.

Like Hanna, Pensuwan is a fifth-year pharmacy major and has quite the resume in soccer.

“I had the opportunity to play in a few [Division III] programs, but instead decided to focus more on school,” Pensuwan explained. “During the summer, I played for the Parsippany Soccer Club U-23 men’s team, where we won a national championship at IMG Academy.”

“I contacted [Inzirillo] from Campus Rec and she put me in touch with Maria over the summer,” Thilman said. “I still want to compete and play soccer, so I decided to join the club team.”

Thilman is one of the leaders of the team along with Saad. She also got other girls to join, including Jenna Martini, a sophomore Pharmacy major.

“I heard about the club team from Kristie,” said Martini. “I played soccer throughout high school and really miss playing.”

This past September, with the help of flyers, a shared document on Google and a Facebook group, 55 girls tried out. A year-and-a-half after she started, Saad finally accomplished her goal. Since they were approved by Campus Rec on Oct. 16 as an official team, they’ve reached out to other club teams in an opportunity for the girls to play in a game setting and develop. This is something they work on every week at practice.

Since starting, the team has been approved for the Region 1 Metro NY/NJ Club Soccer League with schools that include Fordham, Stony Brook, Seton Hall and Rutgers.

“We are currently focusing on increasing our skill level and chemistry as a team,” Hanna said. “We will be looking for tournaments to join this coming winter, spring and summer.”